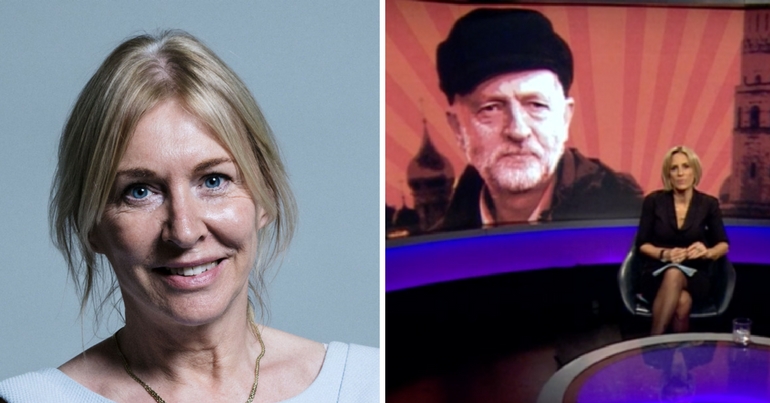 Conservative MP Nadine Dorries has waded into the row about BBC Newsnight‘s recent hatchet job on Jeremy Corbyn. Journalist Owen Jones questioned the programme superimposing Corbyn’s face on an image of the Kremlin, and allegedly photoshopping his hat to look ‘Russian’. Jones tweeted a response to Jess Brammar, acting editor at Newsnight, who denied photoshopping:

Hi Jess, firstly lots of respect for you. The photo of Williamson is in a suit and his photo remains clear. There is no shortage of photos of Corbyn in a suit. A photo was selected which was as Leninesque as possible in combination with a red Kremlin background.

But Dorries was quick to defend the BBC:

And the problem with a friend of Russia who refuses to condem Russia (and any other number of murderous regimes) being portrayed in that way, is what exactly? https://t.co/3Cin9QxO5V

She didn’t have to wait long for an answer. Jones tried to spell it out in simple terms for her:

Attempting to portray a politician who expressed his solidarity with Russia’s embattled anti-Putin dissidents and who is proposing tougher measures on Russian oligarchs as a Russian stooge is straightforward dishonesty.

And other Twitter users soon followed suit. First, there was the issue of the Conservatives taking money from Russia:

It's your party taking money from them…

And then there’s the tricky issue of the Conservatives’ support for Saudi Arabia:

Any number of murderous regimes Nadine? Like Saudi for instance?

Given that you're currently helping The House of Saud turn Yemen in to a crater, maybe you should reconsider using the phrase "murderous regimes."

Looking forward to your condemnation of Saudi Arabia any day now.

In fact, Corbyn has condemned the Salisbury attack:

The attack in Salisbury was an appalling act of violence, which we condemn in the strongest terms.

The Russian authorities must be held to account on the basis of the evidence and our response must be both decisive and proportionate.https://t.co/yaI3fXbAAu

He also called for an evidence-based approach, in order to avoid the extremely serious risk of a new cold war:

To rush way ahead of the evidence being gathered by the police, in a fevered parliamentary atmosphere, serves neither justice nor our national security.

And Dorries’ claim that Corbyn has refused to condemn ”any other number of murderous regimes” is a bit rich. Theresa May recently hosted crown prince Mohammed bin Salman of Saudi Arabia when he visited the UK. Saudi Arabia’s war on Yemen has killed or injured 5,000 children and left seven million people facing famine. Yet the de facto leader of this particular ‘murderous regime’ was welcomed by the government with open arms.

In contrast, Corbyn asked Theresa May at Prime Minister’s Questions on 7 March:

As she makes her arms sales pitch, will she also call on the crown prince to halt the shocking abuse of human rights in Saudi Arabia?

But Nadine Dorries is strangely silent on her party’s support for the human rights abusing regime of Saudi Arabia.

On 17 February this year, Dorries tweeted:

Right, I’m giving up Twitter for Lent. My parl staff or publisher may RT or post the odd PR thing but, I won’t be looking and I’m even deleting the app. See after ? Easter.