Nicola Sturgeon's SNP makes a stand for what’s right, and sticks two fingers up at the Tories - The Canary 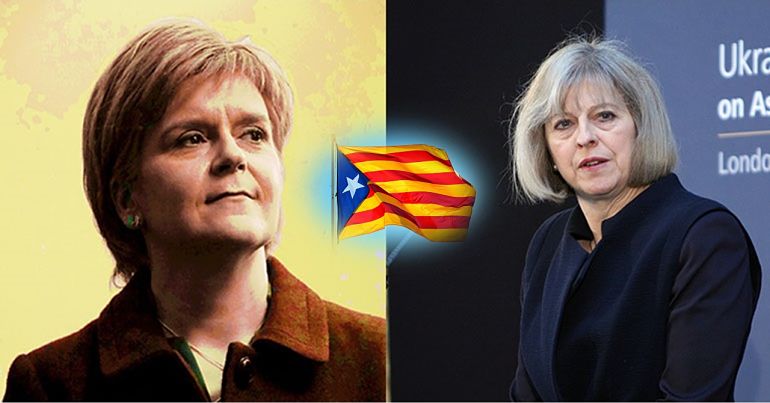 On 23 March, a Spanish Supreme Court judge ordered the arrest of five Catalan politicians. This added to tensions that have existed in Catalonia since Spain responded violently to an independence referendum in late 2017. The judge also issued international warrants for a number of other politicians, including Puigdemont.

This latest development has led to mass protests in Catalonia.

The SNP vs the Tories

Following Puigdemont’s arrest, a brief statement from the British government on 25 March read:

The position of the British Government is well known: we want to see the rule of law respected, the Spanish Constitution upheld and Spanish unity maintained

It is well established that the Scottish Government supports the right of the people of Catalonia to determine their own future and that we strongly oppose the Spanish Government’s decision to seek the arrest and imprisonment of independence supporting politicians.

This statement came in the wake of a Spanish arrest warrant for former Catalan minister Clara Ponsatí, who is a professor at the University of St Andrews in Fife.

Sturgeon then lamented that her government had “no powers to intervene in this process”. But she made her opposition to Spain’s techniques very clear:

To all those angered by latest developments on #Catalonia, please read @scotgov statement below. Our support for Catalan self determination and strong opposition to Spain’s decision to seek the arrest and imprisonment of independence supporting politicians is well established 1/ pic.twitter.com/GIfgptAzqS

SNP MP Angus MacNeil, meanwhile, went even further – calling on the EU to ‘cast Spain out’ from the union:

It is not just the EU that is failing to get to grips with the fascism of Spain but the wider world also – however, that is not an excuse for either.
Glad Scot Gov have said they "strongly oppose" the Spanish Gov's obviously fascist behaviour.

This is why Spain has to be cast out … You cannot have @policescotland doing the political work of the fascists in the Spanish Gov who jail people for peaceful democratic politics!! https://t.co/1KNvuqaDW0

Police clash with protesters as Spain intensifies its crackdown

Over in Catalonia, meanwhile, there have been mass protests calling for the liberation of imprisoned politicians. There have also been allegations of police abuse:

Crashes in #Barcelona
The incapability of #Spain to generate a political solution to what Catalans want is simply stupid. It seems anchored in the XIX century.#ShameonSpain#PrimaveraCatalana#catalanrepublic#Catalonia pic.twitter.com/tIqtSweJ8V

The view of many commentators on Twitter is clearly that Spain is attempting to crush the democratic will of the Catalan people, and that these tactics will only make the situation worse:

.@Plaid_Cymru condemns the detention of Carles Puigdemont @KRLS in Germany. He’s done nothing more than seek change through peaceful & democratic means. Wales & UK must express support for people’s right to decide their own future.@JillEvansMEP @catalangov pic.twitter.com/VZVYjCkP9J

Hard to believe that a Professor at Scotland's oldest university is facing arrest for political activity, when we thought European political prisoners were an injustice of history books. Spain's actions are an attack on democratic & human rights – including academic freedom.

#Spain is devoid of any #democratic initiative to address #Catalonia and has reverted to jailing ideas, holding political #hostages and unleashing police brutality on the public#Democracy is under threat, #Europe must reject #Francoism pic.twitter.com/NCr26I2IDe

The Spanish Supreme Court insists that Catalonia’s leaders must face charges of “rebellion, embezzlement or disobeying the state”. But the politicians in question deny these allegations.

For many international observers, including the SNP and other UK politicians, Spain’s latest attack on democratically elected politicians is shameful. And it is not something that a 21st-century British government should be supporting.