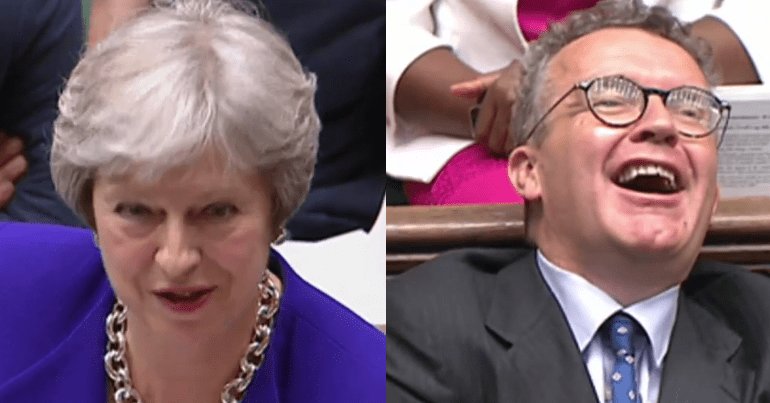 Theresa May apparently shot herself in the foot at Prime Minister’s Questions (PMQs) on 18 July. So much so that parliament roared with laughter.

Let me also look at what the right honourable gentleman has been doing over the last week. While I was agreeing the future of NATO with President Trump, he was joining a protest march against him.

But given that over three quarters of the public have a negative view of Trump, according to YouGov, May might have miscalculated. Indeed, the Labour benches interrupted May with an eruption of laughter:

May tried to woo Trump, although the US president both undermined her Brexit position and talked up her rival Boris Johnson. Meanwhile, Corbyn joined a 250,000-strong protest against Trump and his xenophobic policies.

I'm not sure saying "I was meeting with Trump, Corbyn was protesting against him" is a particularly good line for May. He is wildly unpopular in the UK. #PMQs

Theresa May has badly misjudged how people feel about her spending time with Trump. People openly laughing at her. #PMQs

Right side of history

Even on May’s own terms, she doesn’t appear to be doing well. Because Trump has repeatedly undermined NATO since visiting the UK.

By contrast, Corbyn stood with protesters. And just as when the Labour leader demonstrated against the 2003 invasion of Iraq, he’s no doubt on the right side of history again. As is everyone standing against Trump’s dangerous far-right response to a global system in crisis.