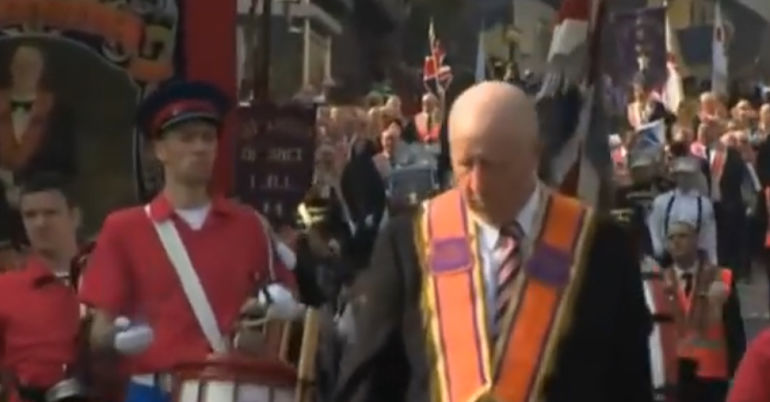 The Orange Order has postponed a march planned for Saturday 21 July after a recent “anti-Catholic” attack on priest Canon Tom White.

The attack, during an Orange walk on 7 July, sparked an urgent debate in Scotland. Father White was reportedly spat at twice and anti-Catholic abuse was shouted as he spoke to parishioners outside St Alphonsus Church.

The incident has been condemned by all parties present and involved, and a petition to ban Orange Order marches in Glasgow gathered over 75,000 signatures.

The Grand Orange Lodge of Scotland has said:

no members of the parade were involved…

Susan Aitken, leader of Glasgow City Council, suggested in The Herald that the attack was inflicted by perpetrators who:

Councillor Hepburn of Glasgow’s Calton Ward expressed his feelings about the attack:

This is not acceptable. No one should ever be attacked like this in their own community not least at a place of peaceful worship. As local Cllr and former attendee of St Alphonsus I’d urge anyone with info to please contact GCC Processions Committee [email protected] https://t.co/t7ZRiKFgpw

The Herald reports that SNP council leader Aitken committed to taking a “strong stance on marches”. After the ‘abhorrent attack’, which prompted calls for the marches to be rerouted away from St Alphonsus, Aitken wrote in the Herald:

In the coming weeks and months several more parades are scheduled to pass St Alphonsus’ Church in the east end. If the organisers had any self-awareness they would re-route and avoid local potential flashpoint. I hope they voluntarily agree it is unacceptable for them to continue to pass these places of worship. If they do not, Glasgow City Council will insist.

The Orange Order announced on 18 July that the march planned for Saturday 21 July is to be postponed, to allow reflection and “fresh forward thinking perspective” before future events take place. In a statement, the Grand Orange Lodge of Scotland said:

We welcome the opportunity to continue positive dialogue with Glasgow City Council, the Police, and other stakeholders regarding future parades.

We should be looking forward, not back, and our lodges today therefore took the decision to postpone the parade due to take place this Saturday, therefore allowing some additional time over those discussions which would give everyone the opportunity to look at matters from a fresh, forward thinking perspective

Over 75,000 people have signed an online petition calling for the marches to be banned. But Glasgow City Council has rejected the petition, saying:

the 75,000-strong online petition did not meet the council’s requirements as it may have been signed by people who live outside Glasgow.

For the council to consider a petition, it must meet certain criteria.

By not considering the petition, the council seems to be treating the incident as an isolated issue. But the implications of the Orange Order’s marches may affect people far beyond the boundaries of the city’s jurisdiction. Residents in neighbouring council areas, like South Lanarkshire and North Lanarkshire, could also be affected by the marches as a result of road closures and the high volume and length of processions, and hate.

He [Canon White] told BBC Radio’s Good Morning Scotland programme it was customary for marchers to stop playing music as they passed places of worship. The music was replaced by “unpleasant chants which talk about being up to your knees in Fenian blood”, he added.

‘No room for hate’

Sectarianism can have a heavy impact on people in Scotland. After the attack, Scottish Labour leader Richard Leonard wrote:

The reported sectarian attack against Father White in Glasgow will disgust people of all faiths and backgrounds across Scotland.

There is no room in our society for this type of abusive, threatening and hate-filled behaviour.

The historic issue of sectarianism still prevails in contemporary Glasgow and surrounding areas, usually between the Catholic and Protestant faiths. It can take form in actions surrounding the ‘Old Firm’ football teams of Rangers and Celtic. And, apparently, it can also be present at Orange Order events such as the one on 7 July. These incidents can reinforce religious or cultural stereotypes of a particular social group.

Scottish political parties have tried to combat sectarian behaviour. The SNP, after winning a majority in the Scottish Parliament in 2011, introduced the Offensive Behaviour at Football and Threatening Communications (Scotland) Act 2012. The act was recently repealed after all political parties voted to scrap it, because it failed to address the issues of sectarianism and unfairly targeted football fans. The Scottish government highlights sectarianism as a complex issue that the government is “playing catch-up” to tackle.

Are Aitken’s actions going to be enough?

The Orange Order has expressed a willingness to cooperate with police, and encouraged anyone on the parade who has information to contact the police in finding the perpetrators. This addresses the short-term priority surrounding the attack on 7 July. It has also committed to reflecting on future events held.

But this alone may not defeat the underlying issue of ongoing sectarian hate. The anti-sectarian charity Nil By Mouth is “committed to a Scotland free from Sectarianism”. It believes it can achieve this aim by challenging sectarian attitudes in society and working with elected officials. Nil by Mouth also aims to raise awareness of sectarian issues through education, and offer support for anyone affected by sectarian hate.

Glasgow City Council must now urgently adopt these kinds of goals into its longer term strategy.

– Support to Nil by Mouth, if you agree with the work they do.