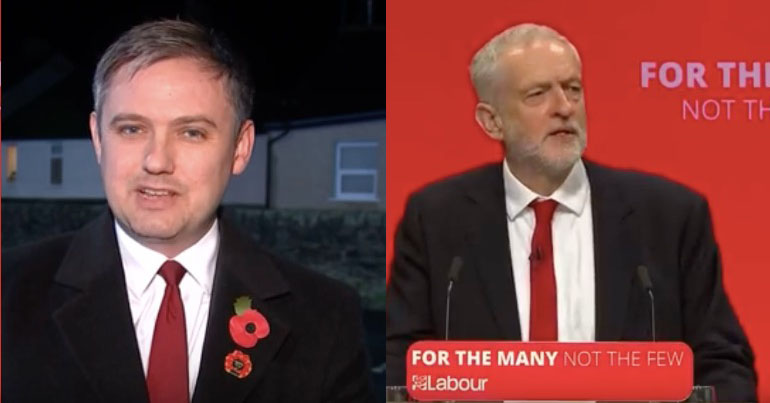 Suspended MP John Woodcock has resigned from the Labour Party, sending a heated letter to Jeremy Corbyn. He will now stand as an independent.

The MP for Barrow and Furness quit amid a disciplinary investigation into alleged sexual harassment claims. He opened his letter by criticising Corbyn’s decision to not appoint an independent investigation for his case:

My letter to Jeremy Corbyn resigning from the Labour Party. I will continue to serve the people of Barrow and Furness as an independent MP pic.twitter.com/8PJtgurK3X

Woodcock was suspended in April following allegations that he sent inappropriate emails and text messages to staff. In his resignation letter, he brands the sexual harassment probe into him as “rigged” and “manipulated for factional purposes”.

According to the Mirror, Labour sources warned that, following Woodcock’s resignation, the sexual harassment probe will now be dropped. As he is no longer a Labour Party member, the party has no power to sanction him or force him to attend a hearing.

After addressing his suspension, Woodcock continued by outlining his view that Corbyn has made the Labour Party unfit to deliver on “objectives” within his constituency.

The former cabinet minister and aide to Gordon Brown then went on to say that Corbyn would be a “risk to UK national security as Prime Minister” and that Labour was “no longer the broad church it has always historically been”.

Woodcock continued his attack on Labour, alleging that:

Anti-Semitism is being tolerated and Labour has been taken over at nearly every level by the hard left, far beyond the dominance they achieved at the height of 1980s militancy.

Woodcock concluded his statement by affirming that he will vote with the Conservative government when “it is trying to do the right thing”, pledging his loyalty to his constituency.

Woodcock has been a consistent critic of Corbyn’s leadership. This seemed to have changed in 2017 following the general election result, in which Woodcock issued an apology to the Labour leader. In this apology, he admitted he “got it totally wrong” about Corbyn and was sorry for “two years of pitched battles and bad blood”. Woodcock’s stance has since changed again amid his suspension.

The pair also haven’t seen eye to eye on many key issues. Woodcock has previously voted in favour of military interventions abroad, defended President Recep Tayyip Erdoğan’s repressive regime in Turkey, and essentially voted against holding Saudi Arabia to account for alleged abuses in Yemen. On a more local level, the Barrow and Furness MP’s view on Trident was in stark contrast to Corbyn’s, with Woodcock stating: “Anyone who came out on the doorstep in Barrow will have seen what a massive issue Jeremy’s lifelong position on Trident and several other issues was locally”.

The news of his resignation didn’t come as a shock to most people in light of his disciplinary investigations. But many have been sceptical of Woodcock’s motives in regards to his reason for resigning:

Others highlighted his links to Saudi Arabia:

John Woodcock has quit the Labour Party however he will continue as an Independent MP meaning he'll still be on a salary of £77,000 a year…….

…….plus free luxury trips to Saudi Arabia all paid for by the rulers of a country committing a War of Terror in Yemen pic.twitter.com/pSwZFslnPg

John Woodcock can now represent the arms industry in Saudi Arabia without the unhelpful baggage that comes with being a member of a socialist party. Makes sense. https://t.co/zfES3rAUBo

Others reminded us of his links to the Turkish right:

John Woodcock, shill for the arms industry, Saudi Arabia and Turkey, is not a centrist. by objective political standards he is solidly right wing.

Corbyn has since responded to the resignation. A Labour Party spokesman stated: “Jeremy thanks John for his service to the Labour Party.”

This sees the ending of a bitter relationship between Woodcock and Labour. Woodcock, now unshackled from his party chains, has faced calls to resign his seat and run again as an independent.