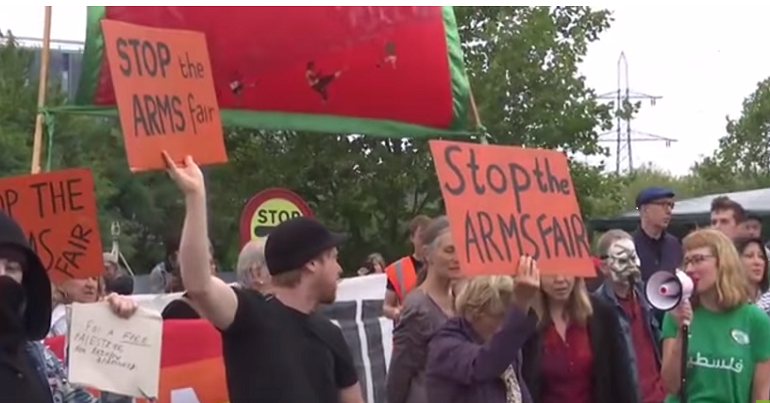 UK sales of arms to human rights abusers across the world have almost doubled in the last year, according to figures compiled by Campaign Against Arms Trade.

Many of those UK arms licences were purchased by countries on the UK human rights abuses watch list.

The increase in sales of arms, including to those countries committing human rights violations, has angered campaigners.

Every year the UK Government licences hundreds of millions of pounds worth of arms to human rights abusing regimes around the world.

There is very little oversight of how these arms are used or who they are used against. The arms sales being agreed today could be used to fuel atrocities for years to come

On the face of it, the official UK government stance on human rights violations seems clear:

In too many countries, human rights are not adequately protected, often creating a cycle of suffering, instability, and poverty.

We’ll stand up for human rights by working with international bodies and priority countries, not just because it’s the right thing to do, but because a safer, more prosperous world is in the UK’s national interest.

Yet sales to Saudi Arabia, for example, have continued in direct contradiction to official rhetoric.

Theresa May’s government is “actively arming and supporting many of the regimes that even it believes are responsible for terrible human rights abuses”, @andrew_graeme of @CAATuk tells @Jon_S https://t.co/G7EvAaQsQu

And Saudi Arabia is not the only controversial country that the UK is supplying with arms.

Bahrain, which is accused of suppressing free speech and torturing political dissidents, has also been buying arms in the UK.

Israeli occupation forces in Palestinian territory, meanwhile, have been accused of breaching international law. Yet collaboration between the UK and Israel, particularly in the development of drones and surveillance systems, continues.

The UK also supplies China, which enforces surveillance on its population, limits personal and political freedom, and continues to suppress Tibetan activists.

Bangladesh is another country that buys arms and military equipment from the UK. The country has seen a spate of forced disappearances, including that of London lawyer Ahmad bin Quasem. He was abducted from his family’s home in August 2016 and has never returned.

The Farnborough arms-dealing event, taking place from 16 July to 22 July, will continue to supply dictatorships and occupiers with weapons to kill and suppress. But protesters and Campaign Against Arms Trade will be there to expose the hypocrisy of UK arms deals.

– Ask your MP to stop the sale of weapons to Saudi Arabia and other human rights abusers.