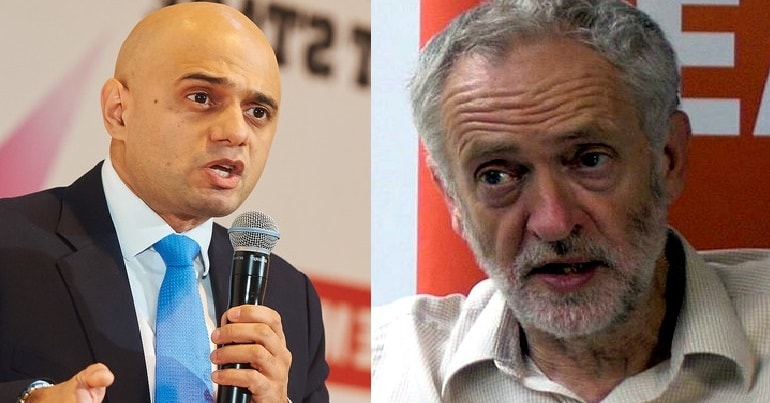 The home secretary apparently exploited the Holocaust to smear Jeremy Corbyn on 19 July.

Sajid Javid seemed to suggest that the Labour leader denies the Holocaust. This has led to calls for libel action against Javid for making the entirely unsubstantiated claim.

Javid began by smearing Corbyn as having a “problem with Jews”. Then, Twitter user ‘Muhammad Shahab’ seemed to question whether the Holocaust happened: 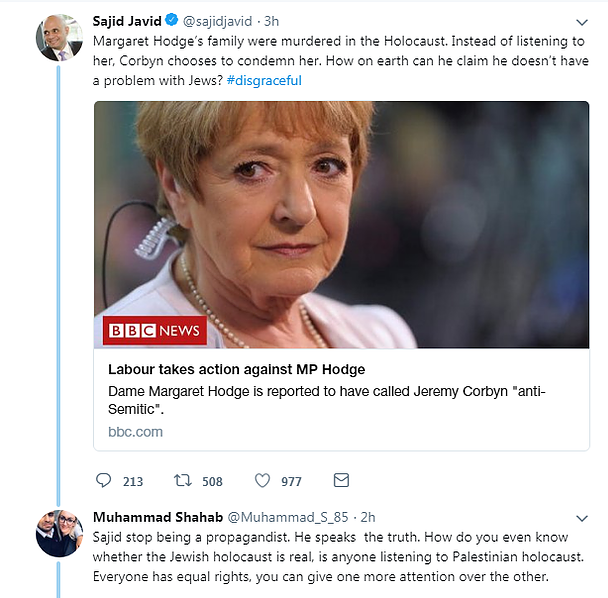 But Javid didn’t shut down Shahab personally for holding such abhorrent beliefs. The MP for Bromsgrove appeared to suggest that he holds such an opinion because of Corbyn:

How can you even question the Holocaust. Please think carefully about what you are saying. Don’t be misled by Corbyn.

Javid seems to imply that Shahab questions the Holocaust because Corbyn “misled” him. In turn, that suggests that Corbyn himself is a Holocaust denier, if he is directly ‘misleading’ people to question the Holocaust as Javid claims.

.@sajidjavid are you seriously accusing @jeremycorbyn of being a Holocaust denier? Seriously I’d apologise, detract and wind your neck in. And whilst your at it launch an investigation into Islamophobia in your own sorry excuse for a political party https://t.co/BaQnrugTY2

And the home secretary’s tweet has sparked condemnation on social media, along with claims that it was potentially libellous:

I think this is libel Sajid

What the hell are you talking about, you can't use someone else's words to point score, you know very well that @jeremycorbyn is no anti semite, I think you should clean you're own Islamophobic and Anti-Semetic sewer before starting to complain about @UKLabour.

That's a low reply. To a low tweet. God help us if this is what politics is all about now.

So now Sajid Javid is accusing @jeremycorbyn of encouraging Holocaust denial. This is a sick allegation. Is there no limit to the level they will lower themselves to in their attempts to smear him? I suggest Corbyn gets in touch with his lawyers asap. https://t.co/2AFumpK2oe

Others recalled the libellous claim that Conservative MP Ben Bradley made about Corbyn in February. The Labour leader won damages after Bradley accused him of selling “British secrets to communist spies”. Corbyn then donated the money to Bradley’s local foodbank and a homeless charity:

At the time, Bradley was forced to apologise with probably the most retweeted post from a Conservative MP:

Many people pointed to the action the Labour leader has taken against antisemitism, as opposed to the words of Javid:

Don't be misled by Javid. https://t.co/sdLUGT0cXu

This video from Corbyn supporters details some of those motions:

You know Labour are doing well when the smears start! Desperate stuff from the usual suspects in the PLP. The truth👇🏻pic.twitter.com/gpWXHE8uvH

At the time of publication, Javid hasn’t responded to social media allegations that he libelled Corbyn.

The home secretary should hang his head in shame.