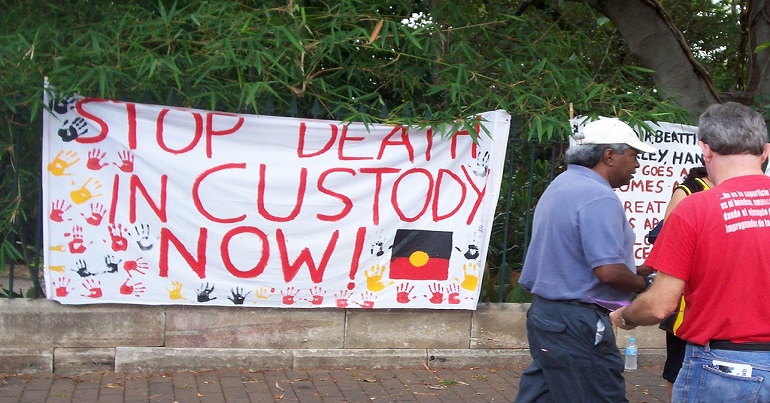 This week, an inquest into the death of an Aboriginal man in custody is underway at Sydney’s Downing Centre in Australia.

David Dungay Jr was a mentally ill 26-year-old who suffered from Type 1 diabetes. He was being held at the Long Bay mental health ward. It’s claimed that, on 29 December 2015, a dispute broke out. Dungay ‘insisted’ on eating biscuits, and when told to stop he didn’t comply.

Five officers then forcibly restrained and injected him with a sedative. Within an hour, he was dead.

The inquest is expected to last for two weeks.

The footage that has emerged during the inquest is harrowing. Dungay repeatedly shouts “I can’t breathe“, to which an officer retorts “If you can talk you can breathe”.

Eyewitnesses say that the prisoner was spitting blood and screaming. The video evidence corroborates this version of events. One of the officers told the inquest that he did not consider it to be “excessive” to call for the support of a specialist squad. But it has emerged that medical staff were not alerted, and Aboriginal liaisons were not consulted either.

Dungay’s family have campaigned for answers since his death in 2015. His nephew Paul Silva said:

No family should have to go through all of this: the trauma, the pain, the heartache, to gather like this as a community or a family. We should gather like this at Christmas time, not to protest a death of a person that was locked up in custody.

Justice for David Dungay: Family and friends at the inquest into the 26yo’s death in custody in 2015 @SBSNews pic.twitter.com/WF5OZ9wbIQ

The data on incarceration among the Aboriginal community is shocking. Although Aboriginal people make up just 2% of the population, they represent 28% of the Australian prison population.

The figures for child detentions are even more depressing. Aboriginal minors are 26 times more likely to be detained than non-Aboriginal children, and they make up 54% of the total of children in juvenile centres across Australia.

In the Northern Territory (NT), meanwhile, the number of Aboriginal children that make up the population of detainees has been climbing. And today, it represents 100%. Aboriginal and Torres Strait Islander people make up roughly 25.5% of the NT’s population – the highest proportion in any Australian state or territory.

Once within the prison system, Aboriginal children are at a disadvantage. They are often exposed to racist and sexual abuse, and long periods of isolation.

The Royal Commission report of 1991, set up to investigate the imbalance in Aboriginal deaths in the prison system, made 339 recommendations based on its findings. But most of them have not been implemented. And some campaigners claim that conditions are actually worse.

The fight for justice for the Dungay family is far from over. But regardless of the outcome of the findings, conditions for Australia’s Aboriginal people in terms of popular discourse and incarceration rates remain abysmal. And that is unacceptable.