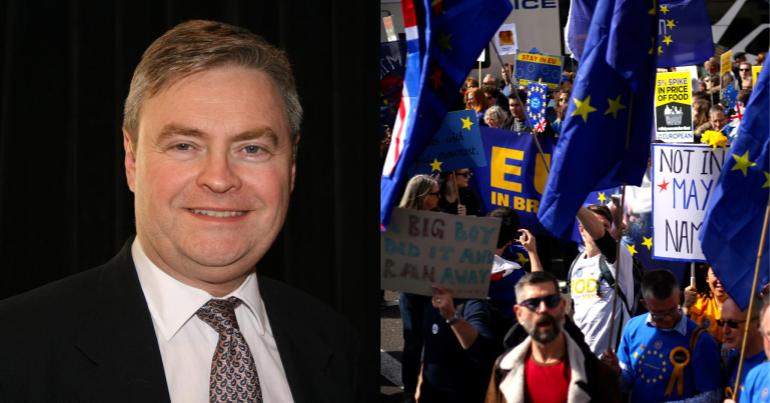 A Conservative MEP is facing a massive backlash after calling for “those undermining the UK through extreme EU loyalty” to be tried for treason.

MEP David Bannerman claimed that the Treason Act of 1372 should be brought up to date in a tweet on 25 July. Whilst doing so, he compared ardent Remainers to terrorists.

Sharing a picture of the Telegraph‘s front page, the MEP claimed the treason act should include those attempting to “undermine” the British state. This included the act of “extreme EU loyalty”. 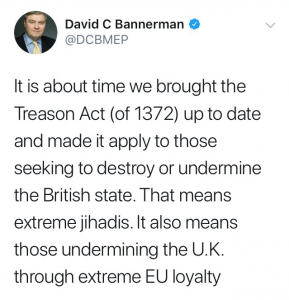 The Conservative MEP is a committed supporter of Brexit, but his latest comments still came as a shock to many.

Bannerman said of the proposed updates to the act:

This means extreme jihadis. It also means those undermining the U.K. through extreme EU loyalty.

The MEP sent the original tweet out around 9am on 25 July, but he deleted it within the hour. That said, he didn’t exactly sugar-coat its replacement:

It is about time we brought the Treason Act up to date and made it apply to those seeking to destroy or undermine the British state. That means extreme jihadis. It also means those in future actively working undemocratically against U.K. through extreme EU loyalty pic.twitter.com/CXSPCJqjOz

There was a furious reaction online to the Conservative MEP’s calls. Users claimed that Bannerman was seeking to prosecute political dissent:

Just a Tory MEP wanting to prosecute people with different views on the EU for exercising their freedom of speech. pic.twitter.com/CsfVNIDf7D

Calling democratically seeking to remain in the EU “treason” makes you appear like a fascist, someone who is a bit dim, or a dim fascist. Are you not overcome with embarrassment that you sent this tweet?

Responding, the MEP was quick to dismiss his complainants as silly:

Don’t be silly. Nothing to do with healthy democratic debate. What do you think constitutes treason then – it’s good to debate what should be in future treason act?

But he wasn’t getting off the hook that easily:

The Canary contacted the Conservative MEP’s delegation but a spokesperson declined to comment. Speaking to BuzzFeed about the tweet, however, Bannerman said:

I think it [the Treason Act] should extend to those undermining UK interests through extreme undemocratic loyalty to other states including the EU superstate once we’ve left, but this does not of course apply to normal democratic support for the EU.

Elected politicians using words such as these set a dangerous precedent during such divisive times. The use of language is very important, and accusing sections of society of “treason” cannot be the way forward.