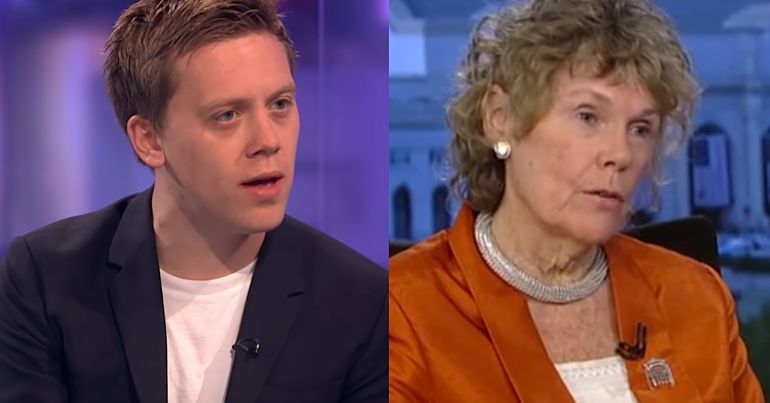 Guardian columnist Owen Jones has called out Labour MP Kate Hoey for tweeting in defence of the Tories:

Imagine being a Labour MP and tweeting this https://t.co/9cULZZpVLh

But it’s safe to say that this isn’t Hoey’s first offence.

Jones is referring to Hoey’s retweet of a Spectator article [paywall] with the headline Don’t blame the Tories for a Brexit ‘no deal’:

Don’t blame the Tories for a Brexit ‘no deal’ https://t.co/jjC2E1Tyor

In the piece, Spiked editor Brendan O’Neill blames [paywall] the EU for the threat of a ‘no deal Brexit’. (Note: He had previously praised Hoey and other ‘Brexit rebels’ in another Spectator article [paywall].)

Hoey clearly agrees with this stance:

if the only deal that will be acceptable to the EU is one which goes against this vote for greater democratic control and keeps Britain beholden to EU rules and laws, then ‘no deal’ becomes more likely, and more attractive.

A mess of the Tories’ making

But people on social media are pointing out that, without the Tories, Britain wouldn’t be in this situation in the first place:

Absolute rubbish. Cameron called a referendum and high profile Tories got into bed with UKIP. Cameron could have stood up to the warring factions in his own party, but chose to rip our country apart. Yes, we blame the Tories.

Meanwhile, others have questioned what the EU is supposed to do in response to this government’s farcical Brexit strategy:

This is the most extraordinary article. I've only skimmed it, but it seems to be blaming the EU for rejecting unworkable 'plans' and treating the warnings of business leaders as an example of subversion of democracy by corporate interests.

John Mann, Frank Field, Kate Hoey and Graham Stringer have voted with the Tories to save Theresa May's shambolic government and ensure a destructive Tory Brexit, or possibly a no deal calamity.

They should all be kicked out of the Labour Party.

And Hoey’s decision to prop up the government in its time of need means that some people blame her for the threat of a ‘no deal Brexit’:

Hoey is a Brexiteer with strong ties to other high-profile Brexiteers such as Arron Banks and Nigel Farage.

This is Kate Hoey who accepted lavish hospitality from Arron Banks, went boating on the Thames with Farage and recently helped the Tories over the line over the Customs Union. Residents of #Vauxhall, please rid the country of this RedKip pest.https://t.co/OT6AWpsvTg

And her continual siding with far-right figures and defence of the Tories means that calls for her deselection are intensifying.

I was in Vauxhall during the last election and put a tick in the "I want a Labour government" box. I hope Kate is deselected ASAP.

She should be deselected.

Hoey is entitled to her view on Brexit, of course:

She's just not really labour anymore is she? Whilst i respect (and entirely disagree with) her opinions on brexit, the values she is championing recently just aren't labour values

Yet her actions are propping up this wretched Tory government, which has decimated Britain – overseeing huge rises in poverty and homelessness, cutting key public services, and creating a hostile environment for immigrants.

Shadow chancellor John McDonnell says he has warned Hoey and the three other Labour rebels that:

this government is reeling now and the longer this goes [on] the more damage it’s going to do to our country – leave aside party, this is damage to the country.

Jones is right. She has no place within the Labour Party.