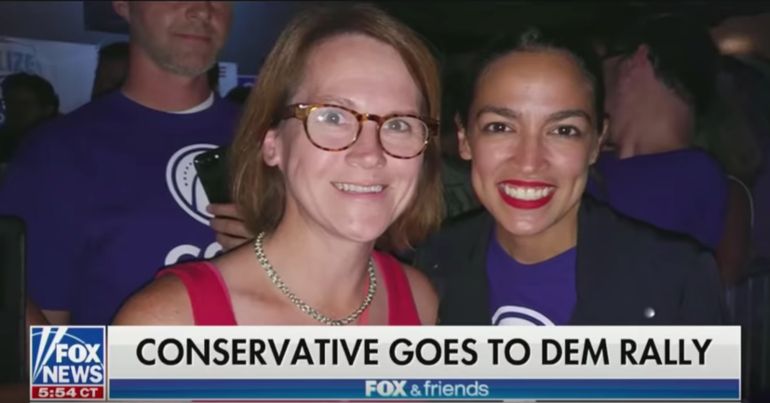 After covering a rally headlined by openly socialist Democratic Party politician Alexandria Ocasio-Cortez, a right-wing journalist made comments that accidentally exposed the absurdity of opposing her platform. And her words could have come straight from the pages of a left-wing satirical magazine.

Virginia Kruta, an associate editor for the right-wing Daily Caller website, had heard Ocasio-Cortez speak at an event celebrating the birthday of another left-leaning Democratic Party candidate, Cori Bush, who is standing for Congress in the midwestern city of St Louis. But her comments about the rally appeared like they were said by someone who was deliberately mocking right-wing opposition to a socialist platform.

She said during an interview on Fox News:

"They talk about things everybody wants, especially if you're a parent. They talk about education for your kids, health care… it was really uncomfortable." #BeyondParody pic.twitter.com/BULE0KFuPJ

Appearing completely unaware of how her remarks were coming across, she then dialed up the right-wing rhetoric as if she were the alter-ego of a TV satirist like Jon Stewart or Stephen Colbert:

And, you know, if you’re not really paying attention to how they’re going to pay for it or, you know, the rest of that, it’s easy to fall into that trap and say, “my kids deserve this,” and, you know, “well maybe the government should be responsible for helping you with that!”

As it happens, Colbert has already satirized the incident on his show:

In her article for the Daily Caller, Kruta said she found the experience “truly terrifying,” because “I saw just how easy it would be, were I less involved and less certain of our nation’s founding and its history, to fall for the populist lines they were shouting from that stage.”

Ocasio-Cortez’s platform consists of policies that would generally be uncontroversial for a European centre-left party, and have even been incorporated into the programs of some centrist and centre-right parties. These include publicly-funded universal healthcare for all US residents, tuition-free higher education at public universities, ending foreign military engagements in the Middle East and elsewhere, and reform of the US banking system.

On Twitter, many were quick to comment about the revealing nature of Kruta’s comments. And Ocasio-Cortez herself tweeted:

Breaking News: Conservative goes to our @CoriBush rally in St. Louis and… gets inspired? And then… gets uncomfortable… about being inspired by a Democrat? 😂 https://t.co/PrOzylu95y

Others ratcheted up the mockery, with one tweeting:

God you monsters!! you want healthcare and education??? for your children??? Barbarians!!!

For her part, Kruta clarified her position:

I said I could understand why it's easy for people to think the government should provide those things. I never said I agreed that is should.

But unfortunately for her, her words had already spread far and wide. And whether she wanted to or not, she helped to expose the absurdity of opposing a socialist platform focused on human development and dignity.