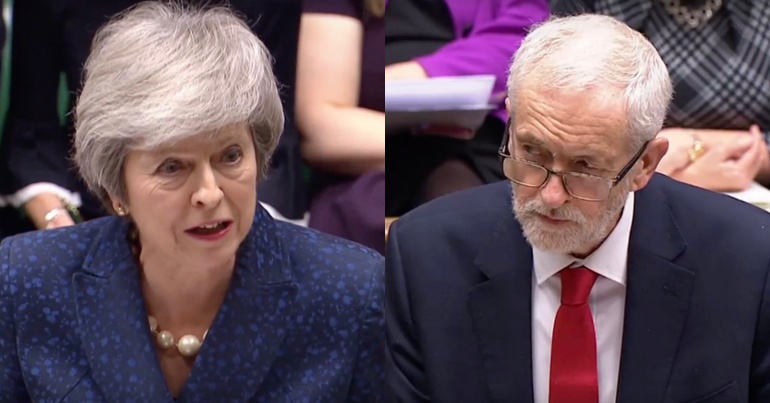 On 12 December, Theresa May faces a confidence vote from Conservative MPs that could trigger a leadership challenge. Ahead of this, she faced Labour leader Jeremy Corbyn at Prime Minister’s Questions (PMQs). And, on a day when her position as prime minister hangs on a thread, she denied all knowledge of the chaos around her. In fact, when she couldn’t answer Corbyn’s blistering attack on her actions, she actually blamed Labour for her own carnage.

Corbyn asked May to give a progress update on her Brexit deal after she cancelled the meaningful vote that should have taken place on 11 December. A fair question in the latest round of political chaos. May claimed that heading back to Brussels to make changes to a deal that she’s said for weeks couldn’t be changed, was simply because she’d “listened” to concerns. But she then went on to say that Corbyn:

Theresa May says Jeremy Corbyn "couldn't care less what I bring back from Brussels… all he wants to do is create chaos", as Labour leader asks what changes she has secured to her #Brexit deal

Is she a liar, is she plain ignorant or does she really not have a clue about the lives she and her government have destroyed?

Since May came to power, “household outgoings have outstripped income” meaning every household has lost an average of £1,250 each year. And this doesn’t even begin to take into account the devastation wrought through eight years of Tory-led austerity. As The Canary‘s Steve Topple reported:

Households reliant on Department for Work and Pensions (DWP) benefits and HMRC tax credits have been hit hardest by austerity… some mothers on benefits will have been hit with the equivalent of £5,500 worth of cuts a year.

In November, Philip Alston – the UN special rapporteur on extreme poverty and human rights – produced a damning report on the impact of austerity and rising levels of poverty in the UK. It has caused “misery” for thousands of people. Yet Alston said Tory government ministers he met on the visit were in “denial”, claiming their policies “were going well”. He stated that poverty in the UK is a “political choice” of the ruling Conservative Party.

And this doesn’t even begin to take into account the extra chaos caused by May’s botched Brexit deal.

On the day May cancelled the commons Brexit vote, the pound crashed to a 20-month low:

Yet on the announcement of the confidence vote against May, the pound rose:

As the Tories trigger a vote of no confidence in Theresa May, the pound against the dollar is *checks notes four times* up? pic.twitter.com/9iU1DPtFdb

Chaos to the economy? Division in society? Look in the mirror, May. Blaming those things on a future Corbyn-led government is an out-and-out lie. It’s time to shut up, leave No 10 and take your abysmal government with you.