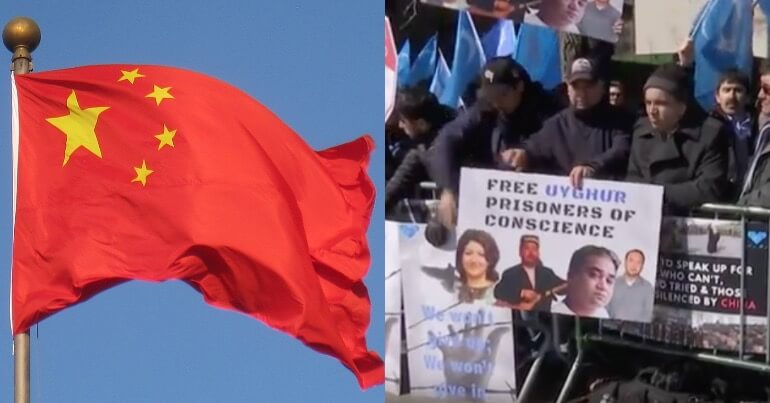 In what some have called “the largest mass incarceration of a minority population in the world today”, China has reportedly targeted over a million Uyghur Muslims in the far-western province of Xinjiang. But as the world starts to take notice, Chinese media has been denying reports of mass detainment, and instead hailing ‘human rights improvements’.

As The Canary previously reported, Chinese authorities have allegedly detained over a million Uyghur Muslims across 1,000 to 1,200 internment camps in Xinjiang. The UN has ‘credible reports‘ of detention camps in which China is treating Uyghurs “as enemies of the state solely on the basis of their ethno-religious identity”. Uyghurs are being sent to these camps for no reason besides their religious identity.

Xinjiang specialist Adrian Zenz describes the detentions as “a very targeted political re-education effort that is seeking to change the core identity and belief system of an entire people”. Reports of abuse, torture, and death are “common in re-education centres”, according to Chinese activists. Detainees allegedly also have to denounce their religion and consume alcohol and pork.

The Canary previously spoke to Dr Enver Tohti, a Uyghur activist living in the UK, to better understand what is driving the Chinese government’s actions. Tohti described the reality for Uyghurs and other persecuted groups as “hell”, and that they were being subject to ‘Chinesisation‘; a process which rejects minority languages, cultures, and beliefs in order to further the dominant Han Chinese culture and language.

Individual accounts appear to support these reports. In an interview with the Independent, for example, former detainee Omir Bekali recounted his life in a Xinjiang detention camp. He explains that the conditions which saw him sent to solitary confinement and deprived of food for 24 hours became so horrific that he contemplated taking his own life.

Activist Aydin Anwar, whose family members were allegedly detained, described the horrors of these camps in a video now shared over 175,000 times on social media:

China has put over 1 million Muslims in concentration camps. This is a human rights atrocity & no one seems to care. pic.twitter.com/2LZiGDtWyn

if the detainees disobey, or if there’s any type of resistance, there is torture being used.

She then describes the extent of the abuse, claiming:

She also spoke of the unjust or arbitrary targeting:

People are being sent to these camps for random reasons, one of them could easily be ‘you were in contact with somebody abroad’, ‘you have a family member abroad’, ‘you engage in religion’ – so if you pray, if you mention the word god in your speech, if you fast, any type of indication that you are practicing religion, that is enough for you to be sent to the camps.

Chinese media has a different view

China defended its actions at the UN Human Rights Council review by telling world leaders that China was “here to seek cooperation”. It denied what it called “not factual” and “politically driven” reports. Instead, it focused on how it had reportedly lifted millions from poverty, all while ignoring its alleged treatment of ethnic minorities.

But one prominent Chinese newspaper went to even greater lengths. The Global Times – whose reporting media analysts claim to be “usually factually sourced” – took aim at “Western media” for refusing to “see Xinjiang governance from a broader perspective”:

Western media's arrogant mindset refuses to see Xinjiang governance from a broader perspective. What is happening in #Xinjiang is a great human rights undertaking that actually contributes to improved human rights in areas subject to extremist thoughts. #Westernmediadebunked pic.twitter.com/xJAIndLKd0

The video opens with a stern critique of Western media’s “myopic and wilfully ignorant” coverage of the issue, saying:

Unsurprisingly, Western media started a wave of intensive propaganda against China’s governance in Xinjiang even long before the UPR process started… Western media interprets the Xinjiang problem as Muslim population in the autonomous region being abused and deprived of their religious freedoms.

It then takes aim at journalists, accusing them of ‘sensationalising’ reports of mass detainment:

For those who make a living by writing sensational stories like this, I have only one thing to say to you – know your subject.

The video then tries to justify the mass detainment of Uyghurs on the grounds of extremist terrorism. This aligns with the Chinese state’s “People’s War on Terror“ and Uyghur separatism, which China has used to justify what others see as the ethnic cleansing and cultural genocide. The video states:

like many other Muslim-majority countries and regions in the world, Xinjiang is subject to the serious threat of extremist thoughts. The region once frequently suffered from terrorist violence akin to clashes in the Middle East. Even Western countries are not immune to violent terror attacks launched by extremists either, right?

The video also argues that the detention centres are nothing more than “vocational training centres” which seek to increase the number of trainees reintegrated into society and finding employment. The camps, it says, are a “periodic and temporary plan aimed at eradicating extremism” which has “proven effective with the least cost to Xinjiang stability”. It then asks Western media:

It continues with another – arguably more grounded – jab at the West:

The concept of human rights originated in the West, and the idea gives some Westerners and Western media a strong sense of moral superiority. They are obsessed with finding faults with China’s human rights situation, despite their own countries being plagued with serious human rights abuses and governance challenges brought by extremism.

And it concludes with a defiant statement:

Western media can turn a blind eye all they want, but no one can stop China from exploring this approach of protecting human rights best suited to its own conditions.

Western media bias against China is indeed glaringly obvious most of the time. But even though China’s strict censorship practices make it difficult to verify information completely, the reports and first-hand accounts of mass detainment appear to be credible.

The denial in Chinese media is worrying, and it won’t help to diffuse scepticism around China’s credibility on human rights issues.

We must take notice

This is a story we absolutely cannot let fade out amongst our increasingly dominant domestic issues. It’s unlikely that the UK is willing to damage trade relations with China, and the same goes for many other countries. But we appear to be dangerously close to ending up on the wrong side of history, again. And we owe it to the many hundreds of thousands of people affected to call on our government to hold China to account.