Twitter schools a Tory MP after he claims I, Daniel Blake doesn't match reality - The Canary 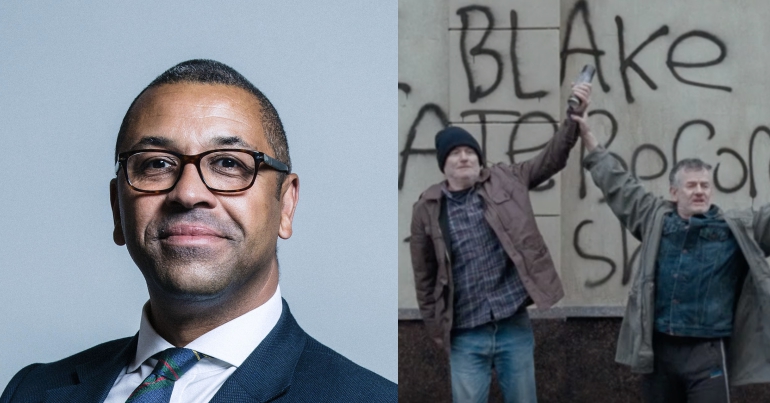 On 5 January, the BBC broadcast Ken Loach’s film, I, Daniel Blake. The film is a gritty and heart-breaking account of the reality of the benefits system in Tory Britain.

As the Canary‘s Fréa Lockley reported, the film was made following six months of research that included visits to jobcentres and foodbanks.

But this apparently wasn’t enough for deputy chair of the Conservative Party, James Cleverly. He took to Twitter to call out the accuracy of the film and to claim it didn’t match his experience. Luckily, Twitter was on hand to give him a dose of reality.

Cleverly started by calling out Labour MP Rebecca Long-Bailey after she tweeted that people should watch the film to see the “human cost of Tory austerity”:

You do realise that it’s not a documentary, don’t you.

He then used a series of tweets to explain why he believes the film is a “political polemic” and “unfair” on “public sector professionals”. He also cited his “experience” of Job Centre Plus staff:

I Daniel Blake, is a powerful and moving film. But it is a political polemic and is particularly unfair on the public sector professionals who work in Job Centre Plus, in my experience they are proactive and helpful. Completely at odds with their portrayal in the film.

People soon corrected him. Including people who said they worked “in the benefit system”:

I work in the benefit system! It’s a true representation! Having to listen to men, my dad’s age, cry because his Heart Specialist refuses to find him fit for work, but a Nurse employed for PIP assessments qualified as a learning disability rules he is fit for work….is crazy!

Healthcare professionals also called him out:

It is art reflecting life. I am a healthcare professional working in a poor area with vulnerable ppl. This could be a case study for many of them. To not know this is to not know how Britain has become in recent years. The poor are being devoured by the 21st. Century

Others questioned his alleged “experience”:

James you have never experienced what it’s like.Myself and my husband both worked in good jobs,neither of us expected to become ill,we are treated so badly by DWP, my neurologist & Dr both provided evidence and statements on my health,a physio ignored them and awarded me 0 points

Considering the film was based on real people's experiences…. When was the last time you were jobless and had to go to the job center? Do you know that they don't actually find you a job? If you're ill you get no sympathy. I've been there, have you?

And Labour MP Dawn Butler highlighted the experience of her constituents:

Many Twitter users pointed out to Cleverly that, yes indeed, I, Daniel Blake, is a work of fiction. However, not only is it a work of fiction that is based on reality, but that reality can actually be far worse:

Dear @JamesCleverly I work in a centre advising people every day on benefits and housing. Although a brilliant film the reality is actual worse than portrayed. I suggest you spend a day at a citizens advice bureau or law centre to understand the impact of your policies. https://t.co/2aBoaLS8Ft

Hi @JamesCleverly #IDanielBlake may be a movie but we see similar & a lot worse on daily basis. You’re more than welcome to come to #Hebburn & spend the day with us so you can see exactly what your party’s policies are doing to real people’s lives every day? #WeAreAllDanielBlake https://t.co/Lfop4qYaxB

Others pointed to the research undertaken for the film:

A few quotes from Paul Laverty, the Screenwriter for the film. It's not a documentary, but then again, you don't deserve the title of Government either. pic.twitter.com/qlQyXaXyjD

In November 2018, Philip Alston – the UN special rapporteur on extreme poverty and human rights – concluded an investigation into the impact of austerity and rising levels of poverty in the UK. Alston found that poverty is inflicting “misery” and that:

homelessness is up 60% since 2010, rough sleeping is up 134%. There are 1.2 million people on the social housing waiting list, but less than 6,000 homes were built last year. Food bank use is up almost four-fold since 2012, and there are now about 2,000 food banks in the UK, up from just 29 at the height of the financial crisis.

Meanwhile, Alston described child poverty in the UK as:

not just a disgrace, but a social calamity and an economic disaster, all rolled into one.

But Alston also noted a “state of denial” in politicians – something that is clearly seen in Cleverly’s tweets:

On the other side, what I found in my discussions with ministers is basically a state of denial. The ministers with whom I met told me that things are going well – that they don’t see any big problems and they are happy with the way in which their policies are playing out.

MP Ian Lavery pointed out that Cleverly appears to live “in a parallel universe”:

.@JamesCleverly lacks any sort of humility, he lives in a parallel universe hidden from the realities facing thousands of honest UK citizens, struggling to survive the callousness of austerity imposed by his merciless Gvt. Instead of mocking try some compassion, too much to ask? https://t.co/Wr7Ru9NR8W

But it’s a universe that is beginning to fall apart. The day after the film was screened, the government announced it was delaying a vote on whether to continue the rollout of Universal Credit to millions of people; a benefit that has already caused misery to so many.

The arrogance of Cleverly’s comments is breathtaking. Unfortunately, it’s representative of so many Conservative MPs; MPs like Jacob Rees-Mogg, who described the rise in foodbank use as “rather uplifting”.

People are dying under the benefits system. Many others are suffering. Cleverly’s comments show just how urgent it is we get rid of this out-of-touch and callous government.