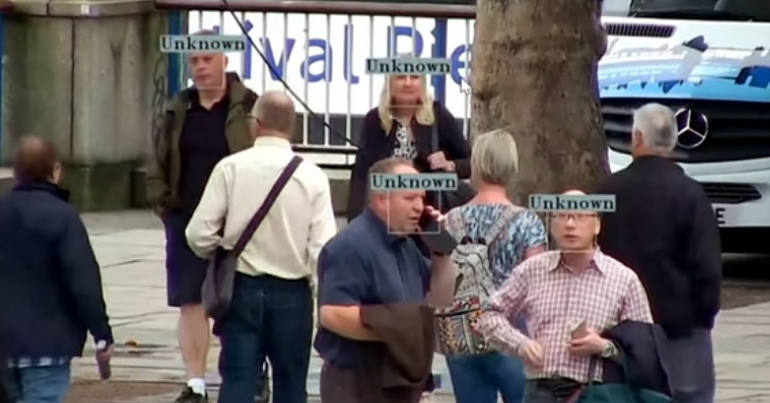 The police have fined a man £90 after he covered his head with his jumper to avoid a police trial of facial recognition technology (FRT). Other people were stopped by police during the trial for trying to hide their faces to avoid the cameras.

The trial – the tenth of its kind by the Metropolitan Police – took place outside Romford station in east London. Observers from human rights groups Liberty and Big Brother Watch came to monitor what was happening. Big Brother Watch tweeted:

A man was just stopped by police for pulling his jacket over his face.

He protested that there was no reason to be stopped as he was surrounded by police + when he got annoyed he was fined £90 for a supposed public order offence.

What kind of oppressive police action is this? pic.twitter.com/qOTISwTcX2

The Metropolitan Police had put out a statement before the Romford trial claiming that anyone who declined to have their face scanned would “not necessarily be viewed as suspicious”. But Silkie Carlo, director of Big Brother Watch, said:

Police press release said they would be handing out #FacialRecognition leaflets. We've been here since the start and haven't seen a single one, so we're having to do the job for them. This is not policing by consent #ResistFacialRec pic.twitter.com/egdiBz6U6I

We've just spoken to a man (a youth worker) stopped by police #FacialRecognition today for "looking like someone". Made to prove his identity then told he could put in a complaint.

"It was embarrassing in front of everyone. There must be better ways than this"#ResistFacialRec pic.twitter.com/QHGtpbaqdh

For train travellers, it was impossible to avoid the cameras:

Met police have 2 #FacialRecognition cameras aimed at #Romford Station entrance today (under the bridge). Station staff tell me it's the only entrance/exit so no chance avoiding cameras if getting the train. Police also set to be here for rush hour this evening #ResistFacialRec pic.twitter.com/DFBTM7bNiq

FRT can theoretically scan up to 300 faces per second. Faces can then be matched to a “watch list” of photos in the police database, or even photos taken from elsewhere, such as social media.

A freedom of information request by the Independent revealed that the Metropolitan Police spent over £200,000 on FRT during the 2015/16 and 2017/18 financial years. No arrests were made as a result of the technology being used during that period.

According to Liberty, there is no law or Home Office policy covering the use of FRT. This, they say, allows individual police forces “to make it up as they go along.” Last year, Liberty even advised people attending anti-Trump protests to paint their faces in order to thwart any use of FRT by the police.

It is the public’s support that has allowed us to bring this legal challenge. We’re hoping the court will intervene, so the lawless use of facial recognition can be stopped. It is crucial our public freedoms are protected.”

The technology used in Romford forms part of the Met’s ongoing efforts to reduce crime in the area, with a specific focus on tackling violence. As with all previous deployments the technology was used overtly. We continue to engage with many different stakeholders, some who actively challenge our use of this technology.

It may be that a lot more ‘actively challenging’ by “stakeholders” – that means all of us – is going to be needed in order to stop this potentially unlawful, overbearing and discriminatory police surveillance.