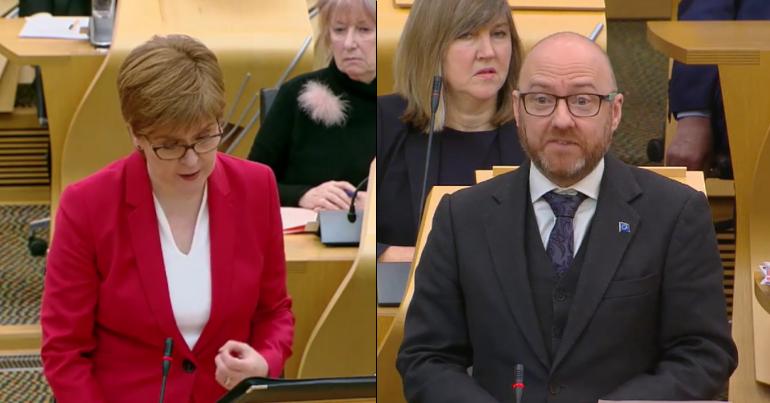 The UK government was lambasted in the Scottish parliament for its inability to ‘police the arms trade.

Scottish Greens co-convenor, MSP Patrick Harvie, also put pressure on the SNP over support given to arms manufacturer Raytheon. Pointing to recent research, the Glasgow MSP further claimed public money is propping up the arms trade in Scotland. In return, first minister Nicola Sturgeon pledged to take a fresh look at current procedures but said she made ‘no apology’.

The global company is the third largest arms producer in the world and has a plant in Glenrothes.

Support for Raytheon has come through Scottish Enterprise, a publicly funded business agency. Last week it was revealed that Raytheon has received “account management” services free of charge for the past ten years.

The Scottish government has continued to claim that funding went towards “diversification” at the plant. But in 2017, the firm received a £90,009 grant used to review capacity at Raytheon’s Glenrothes bomb-making factory. Scottish Enterprise has given Raytheon more than £185,000 in the past five years.

The company is, however, one of the largest in the world. Research from the Stockholm International Peace Research Institute showed that Raytheon had sales of $23.87bn in 2017. The firm is a major supplier to Saudi Arabia and its Fife made guided missiles have been linked to alleged war crimes in Yemen.

Harvie raised the issue in detail at First Minister’s Questions on 31 January. The Glasgow MSP questioned diversification and highlighted that in 2017, 94% of Raytheon’s sales were arms related.

Harvie also took a swipe at the UK government, saying:

When we raise these issues we are often told, as the Ferret were recently in publishing a report by the Scottish Government, ‘we are very clear that we expect the UK government to properly police the export of arms’. Presiding officer, I don’t expect that.

I fully expect that the UK government will continue to facilitate arms sales to human rights abusers, to countries involved in war crimes and atrocities around the world.

Calling on the government to “reverse support for the arms industry”, the MSP added:

Can the first minister tell us anything that the Scottish government intends to do differently in the future, and meanwhile, isn’t the case overwhelming to withdraw this constant stream of support from the public purse, for this company and others to grow their lethal business?

In response, Sturgeon said she wouldn’t make an apology. She stressed that no money was given directly towards arms manufacturing and that it was focused on “non-military uses and for business diversification”. But the SNP leader did commit to considering changes to the model.

Replying in the chamber, the first minister said:

I remain open to hearing concerns about this, to looking at whether there are any changes to the procedures that Scottish Enterprise uses to tighten that up, but I don’t make an apology for our enterprise agencies trying to support our economy and and support jobs…

But Patrick Harvie is right. It is important that is done ethically and morally and that is what Scottish Enterprise and Highlands and Islands Enterprise does, and we will continue to listen to views on this, and if there are changes that we can make we are happy to consider them.

We must ask questions about the arms trade in general. But Harvie was spot-on about one specific thing. The current UK government cannot be trusted to police arms sales. Its senior officials are too busy promoting them.