Last night on the BBC, something so special happened that Brexit became insignificant - Canary Workers’ Co-op 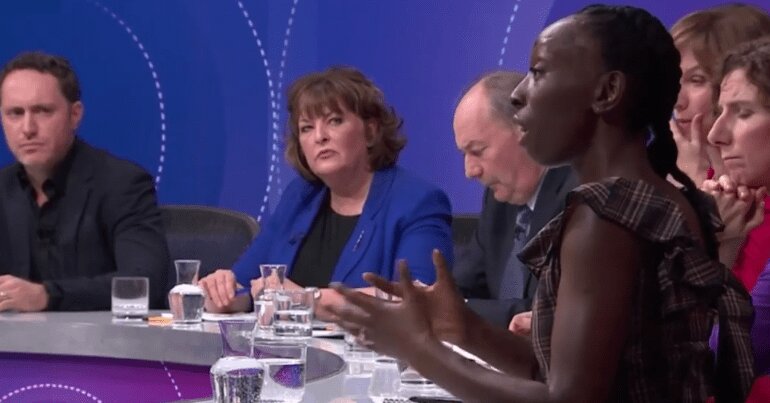 On the 7 February edition of BBC Question Time, one intervention from polymath Eunice Olumide felt like a cultural revolution.

For about 40 minutes the show consisted of panellists and audience members squabbling endlessly about Brexit. Until host Fiona Bruce asked Olumide, an African and Scottish person, about the Liam Neeson debate. In response, Olumide spoke so thoughtfully about racism and capitalism that Brexit became insignificant:

The elephant in the room is the transatlantic slave trade and colonialism, which nobody ever wants to talk about – despite the fact that it’s one of the most significant and horrifying points in history… Whereby you had… for 400 years people living in indentured slavery… When those people who were given freedom or civil rights in the ’60s… it’s very very recent history.

An eloquent response to Liam Neeson

Neeson recently made international headlines by giving an account of a racist and violent reaction he had. Around 40 years ago, one of Neeson’s close friends was raped by a Black person. In response, Neeson initially held all Black people responsible and spent days seeking a situation where he could take out his anger on any other innocent Person of Colour.

Olumide said she thought it was positive that Liam Neeson told the truth. But she also called out such behaviour:

There does seem to be a… collective amnesia about how it is that People of Colour… came to certain parts of the world… I’ve been the victim of various persecution because of the colour of my skin. Now if I was to think to myself, oh because this person did this to me and they were white, than this means I wouldn’t be able to… interact with anybody practically in the entire country that I live in. So I think it’s… ridiculous… that you discriminate or judge anybody based the colour of their skin.

The issue with Black History Month

Olumide has a solution for tackling this “collective amnesia”. She called for the government to include education about slavery on the school curriculum:

The problem with that was that, we didn’t actually deal with any of psychological trauma not just to People of Colour but also to… white people who lived through that, who might’ve participated in that and who might’ve not actually believed in it. None of that is being discussed. We don’t discuss it in our education system. We have things like Black History Month which are like thrown on at the end, which should be part of our curriculum. So that all of us understand… I really feel that would reduce the amount of xenophobia.

It’s worth noting that Labour leader Jeremy Corbyn has repeatedly pledged to increase the study of Black history in UK schools. On a visit to Bristol in October 2018, Corbyn said:

Black history is British history, and it should not be confined to a single month each year. It is vital that future generations understand the role that Black Britons have played in our country’s history and the struggle for racial equality.

Benefiting on the proceeds from slavery

Olumide pointed out that the UK government compensated the slave masters, not the slaves:

And… for some reason none of those people were ever compensated in any way whatsoever… What happened was that the governments, even in the United Kingdom, actually compensated the slave owners as opossed to the people who were enslaved.

Olumide also offered specific details about how elites are still benefiting from the trade through legacy businesses and inherited wealth:

When those payouts were given, one of the gentleman was actually an MP… And there’s a number of different people. You’re talking about figures of like £65m in today’s money… £83m… paid out to replace… say 15,000 slaves.

Capitalism, as we know it, is built on the back of slavery… In the 17th century, things like banking really only existed in London… It was actually invented for merchants… to borrow to… go and exploit human labour. And many of the banks that we use today, whether its Barclays or its Lloyds … they are still benefiting. Many families whether they like or not are living off the proceeds of crime essentially…

Governments are keeping people in the dark

Olumide finished by laying the blame predominantly at the door of 10 Downing Street and the wider establishment rather than ordinary people:

I don’t believe that human beings in their nature are born to be bad people… I think that a lot of time the… governments and the people that control us to a certain extent have chosen to operate this collective amnesia and not educate us properly on what has happened… that has actually led to this vilification of People of Colour…which we still live with to this day.

On 7 February, Olumide single-handedly raised the debate to a level not often seen on BBC Question Time. Her thoughtful account of the root causes of today’s racism and inequality changed the tone in the studio. It was brilliant to see.