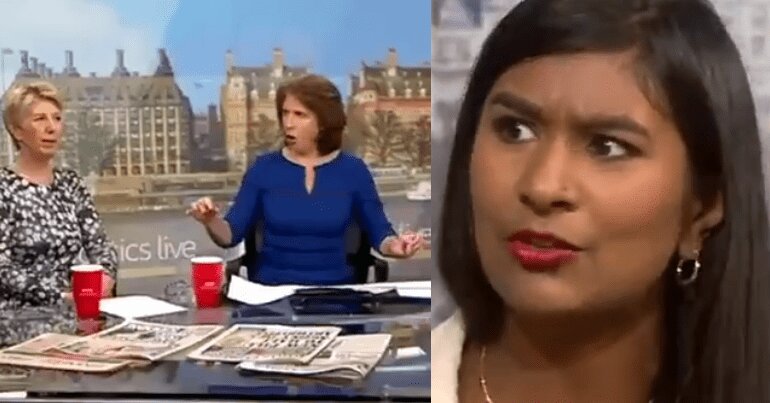 Speaking to one of the seven Blairites who have resigned from Labour, Sarkar said:

Not being Jeremy Corbyn, unfortunately, is not a manifesto in itself. People are going to be looking at things like your record on water privatisation. You are like one of the last people left in the country who still believes in it. They will look at the fact you are in the all-party water group, which is mostly paid for by the water industry. And they’ll go: ‘You know what? That stinks of corruption.’

Coburn then helped to move the discussion on.

Angela Smith went a bit "funny tinged" herself when asked about her record on water privatisation… 💦💦 pic.twitter.com/tmYdYxbn8G

Smith, the MP for Penistone and Stocksbridge, is co-chair of the all-party water group, which private suppliers such as Wessex Water and Affinity Water mainly fund. Also, Sarkar is right to suggest that supporting the privatisation of water is unpopular. Polls have found that 83% of the public support the nationalisation of the water industry.

Towards the end of the show, things only got worse for Smith. The MP appeared to refer to Black, Asian and minority ethnic (BAME) people as being a “funny tinge”, which she later apologised for:

Angela Smith, one of the MP’s who’ve resigned the Labour whip just said it’s not about “being black or a *funny tinge*.” As a boy with a funny tinge, it looks like your racism just spilled out. 🤮

In September 2018, a YouGov poll reportedly found that just 1% of Labour supporters vote for the party because of their local MP. 88%, meanwhile, said they vote for Labour either because of its policies or values. Nonetheless, seven Blairites are quitting the party without calling a by-election to re-contest their seats. Instead, it looks like they’ll simply sit in parliament on their own terms rather than those they were elected on. This reeks of entitlement.

With such failings in mind, Sarkar was spot on to take Smith to task on Politics Live. It looks like it’s already going south for the defectors.