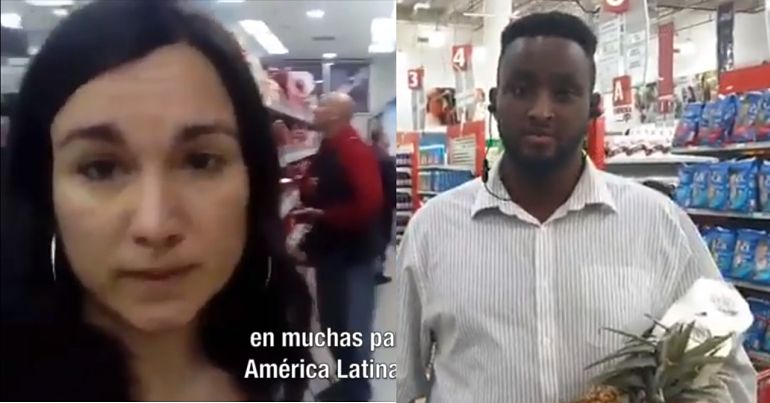 The corporate media paints a dark picture of life in Venezuela. On 1 February, for instance, the New York Times reported from the country’s capital, Caracas, that:

Venezuela is on the brink. Grocery shelves lie empty as food becomes increasingly scarce and expensive.

Venezuelan president Nicolás Maduro, meanwhile, has been called a “dictator” and compared to Stalin (labels that don’t seem to fit with reality).

There is undoubtedly widescale suffering in Venezuela; and a complex economic crisis has made many goods unaffordable. But recent videos from people in Caracas show a significantly different picture from that which the corporate media have been painting.

The other face of daily life in Caracas

Two women, for example, have been compiling videos in Caracas. These show Venezuelans eating in McDonald’s and shopping in malls. They also show markets full of fruit and vegetables, and a pharmacy full of the types of goods that CNN’s Nick Valencia claimed “aren’t available or accessible in Venezuela”.

One of the women presenting the video accepted that there were economic difficulties in Venezuela, saying:

For sure, the economic situation is dramatic for many people in Venezuela. I would say that it is for almost the majority.

But these are not solely Venezuelan problems… Yes, I’ve seen people searching in bins in Caracas – I’ve been speaking to homeless people in Caracas. But I’ve also seen it in Barcelona. And we’re not therefore going to call for a ‘humanitarian intervention’ [there].

“More drinks, fruit, toiletries, crisps, than in my local supermarket back in London”

British citizen Ahmed Kaballo, meanwhile, posted a similar video from inside a Venezuelan supermarket on 14 February:

I’m not saying there are no food shortages in Venezuela. But what I am saying, in this supermarket, is there’s more drinks, fruit, toiletries, crisps, than in my local supermarket back in London.

Kaballo, who is still based in Caracas, told The Canary:

The American ‘Today’ show described Venezuela as a ‘desperate humanitarian crisis’ which is ‘getting worse with widespread starvation’. I definitely have not seen any evidence to support that claim. I go to restaurants and they’re full of Venezuelans… everywhere I have been in the city of Caracas, it’s full of Venezuelans living and enjoying their life.

There are food shortages. There is trouble accessing protein and accessing protein affordably. These are real things in Venezuela. But this… picture we’re getting, in the service of a US coup attempt, that… the country is in a humanitarian crisis and that it’s living under a brutal dictator – it’s again following a similar playbook that we always get whenever the US is trying to target a government it wants to overthrow.

As journalist Max Blumenthal recently told The Canary, Maduro’s main support base is the same group of people that the US is targeting with ‘humanitarian aid’. This represents a major problem for US propaganda efforts: that the people supposedly suffering worst under Maduro are those defending him most strongly. And as recent polls show, most Venezuelans simply do not support US intervention.

Meanwhile, supporters of the Venezuelan opposition – who are generally middle- and upper-class, and of more white and European descent – appear among the chief cheerleaders for ‘aid’, sanctions, and intervention. In other words, the US government and upper stratus of Venezuelan society are attempting to decide what’s best for the Venezuelan population without its consent.

This perhaps explains why they’re painting a post-apocalyptic picture of Venezuela: to shock ordinary people around the world into supporting otherwise unsupportable US intervention. But if people in the West are truly concerned about Venezuela, they should start off by listening to ordinary Venezuelans.