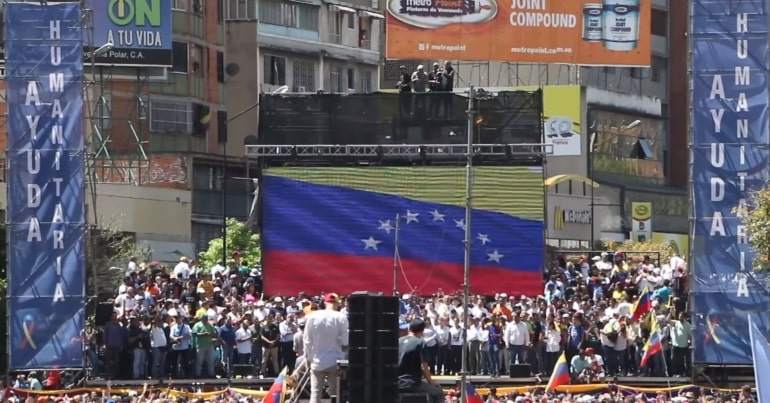 Middle and upper-middle-class Venezuelans demonstrated in a massive march in the wealthy district of Chacao in capital Caracas on 12 February. And investigative journalist Max Blumenthal was in the city to interview some of the attendees. The march culminated in a speech from far-right opposition figure Juan Guaidó, who demanded that US ‘humanitarian aid‘ be let through from the border. But it looks like some of his supporters are just as fond of brutal US sanctions, and even potential military intervention.

One woman tells Blumenthal: “Yes to the humanitarian aid. We need it.” But the Venezuelan government has serious concerns that the ‘aid‘ will be used to secretly ship in weapons. In fact, both the Red Cross and the UN have ‘slammed’ the US ‘politicisation of aid’.

There are 300,000 people that are hungry here right now in Venezuela.

A woman says that a “bunch of kale” costs around 6,000 Bolivars ($2/£1.55). Another says she “lost 10 kilos” in two years – presumably due to the unavailability of affordable food.

Yet person after person said they also supported the US led-sanctions that have squeezed Venezuela’s economy in recent years.

Ironically, one man who complained of inflation said:

The woman who “lost 10 kilos” also approved of sanctions, saying they:

target corrupt officials. We have to make clear that the blockade that [President] Nicolás Maduro’s people talk about does not exist.

But as The Canary has reported, even establishment experts have admitted that the purpose of US sanctions is to “make the economy scream”.

We expect… that today’s measure totals $7bn in assets blocked today, plus over $11bn in lost export proceeds over the next year.

Economist Mark Weisbrot also confirmed that “the sanctions do actually kill people”; and that the latest rounds of US sanctions will “destroy what’s left of the economy”.

One law student complained that the elected government ‘took away his youth’; and he felt it has “made a joke out of the rule of law”. He also said that:

As long as [the US] intervene [militarily] in favour of us, and we can have free elections and freedom, then it would be a good option.

Our National Assembly has the right to also authorise a foreign military mission.

As The Canary previously reported, the 2018 election was not shown to be ‘defective’ or ‘unfair’ in any way. All international observers signed off on its legitimacy.

Blumenthal’s coverage also confirms the ethnic and class divide between the coup‘s supporters and its opponents.

As Jorge Martin told The Canary:

In general, those who oppose the Bolivarian revolution tend to come from the middle- and upper-class layers; and they tend to be more white and of European descent. Those who support the revolution come from working-class and poor layers and tend to be more mixed race, Black and of [Indigenous] descent.

Drop in the bucket

The UK, meanwhile, is withholding £1.2bn worth of Venezuelan gold.

If the ‘West’ really wants to help the Venezuelan people, it should release the country’s assets and remove all sanctions. Until then, any ‘aid’ it offers must be treated with the utmost caution.

Featured image via the Grayzone