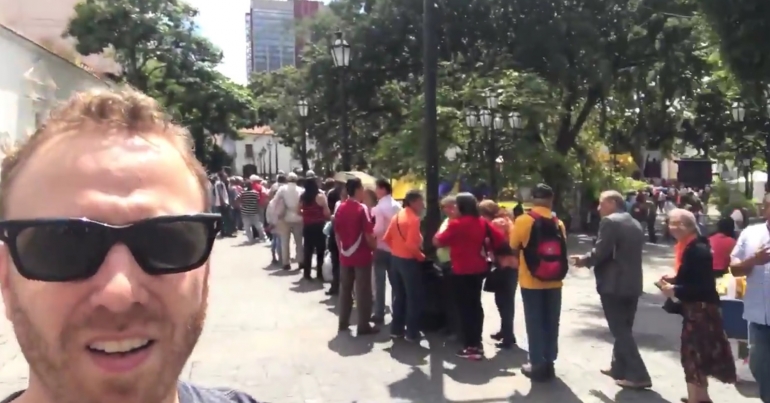 Award-winning investigative journalist Max Blumenthal recently travelled to Venezuela to report on the ongoing US-backed coup attempt there. And his reporting – along with that of other alternative news sources – exposes how the establishment corporate press is downplaying or ignoring important aspects of Venezuela’s situation. In particular, he detailed how thousands of Venezuelans had queued to sign an open letter denouncing US-led foreign intervention.

People have been waiting for hours at Simon de Bolívar plaza to sign a declaration opposing US intervention and aggression against Venezuela. Lines stretch for blocks. Maybe some other western media is here but I haven’t seen them. #HandsOffVenezuela pic.twitter.com/9pM9JVKnve

Blumenthal contrasts his observations on the ground to coverage from the “western corporate media”: 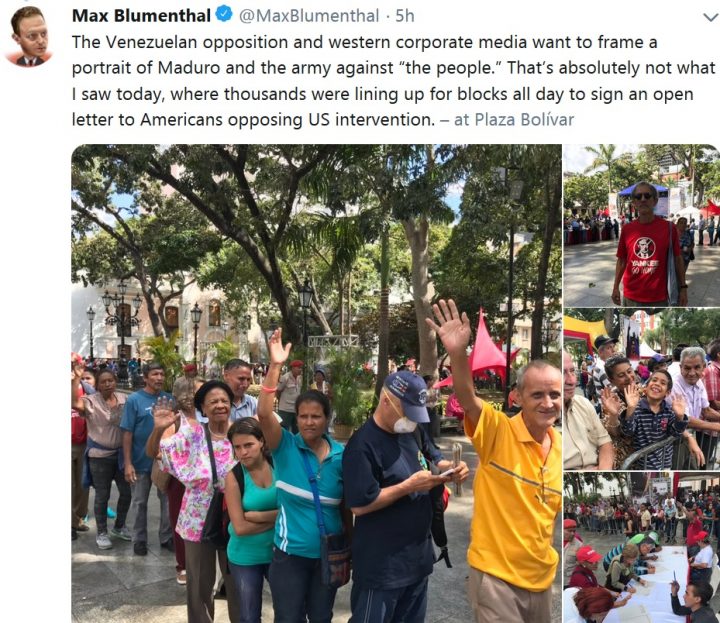 On top of a recent poll showing that the vast majority of Venezuelans oppose foreign interference, tens of thousands – if not hundreds of thousands – of people in Venezuela have been mobilising against the coup attempt:

.@PartidoPSUV and other Chavista forces continue mobilizing on a daily basis, this time in Barcelona, Anzoategui State pic.twitter.com/BBKgOgbXXV

The UN estimates that, due to the country’s extremely difficult economic situation:

the number of Venezuelans in countries across Latin America rose from 700,000 in 2015 to over three million in November 2018.

But the situation is complex. And not everyone in Venezuela is experiencing deprivation:

Here’s your ‘humanitarian crisis’ in #Venezuela, people out socialising on a Friday night… somewhat different to what the pro-regime change media would have us believe.

Meanwhile the sectors which are most affected by shortages still back Maduro. https://t.co/hBN5rVYkV1

Lawyer and journalist Dimitri Lascaris recently reported from an opposition stronghold in the wealthy district of Venezuela’s capital. He said tens of thousands of protesters were in the streets supporting the opposition calls for President Nicolás Maduro to be deposed by the military. But he saw “absolutely no evidence” of state “brutality” towards them.

But these aspects of the Venezuela ‘crisis’ are often lacking from ‘mainstream’ Western reporting. And people have been noticing:

Guardian correspondent who has been doing straight war propaganda for a month unhappy that non-corporate progressive media in Mexico not joining in… https://t.co/5zRz2bfW9c

The BBC is no exception.

Crucial information is also being ignored:

'It’s not just Maduro—as the Western media are presenting it—who opposes the US aid convoy; it’s the UN and Red Cross. Why do none of the above reports note this rather key piece of information…?' https://t.co/EQngwb36BT

And the significance of the media blackout is truly disturbing:

While US media promotes lie that Maduro shut down all opposition press, self-declared president Juan Guaidó is intimidating grassroots, independent outlets like Venezuela Analysis for not legitimizing the coup. Very disturbing https://t.co/sJpNHKfftJ

This media blackout is not limited to reporting out of Venezuela. There were protests outside the Bank of England on 7 February, for example. People were denouncing the bank’s complicity in the strangulation of the Venezuelan economy. But there was next to no mention of this in the British media.

We must ask ourselves why establishment media outlets, with the budgets they have, are failing to do their jobs:

How does the BBC – with its annual budget of approximately £4bn – or other outlets such as The Guardian, or Channel 4, explain it's inability to cover this side of #Venezuela?

They're paid not to.

By design of course.

And Dr Alan MacLeod literally wrote a book on the subject:

Journalists think of themselves as the ideological shock troops against the chavistas and see it as their number 1 goal to overthrow the government. They're every bit as important as the military or intelligence community in this regard. pic.twitter.com/kV1qjrC6yy

‘It’s up to us to show the other side’

Perhaps one commentator summed it up best:

They actively choose not to because of who owns them. Biased news is what we expect. Its up to us to show other side of the story.

The ‘reporting’ on the US-led coup in Venezuela is further proof that media reform is not only desirable but necessary. Powerful elites benefit from distorted media coverage that protects the status quo. So fair and accurate reporting is crucial for any movement seeking to improve our societies. For that reason, we must all do our part to support genuine media reform.