Not to be outdone by the Mail, Sky News does its own hatchet job on Jeremy Corbyn - The Canary 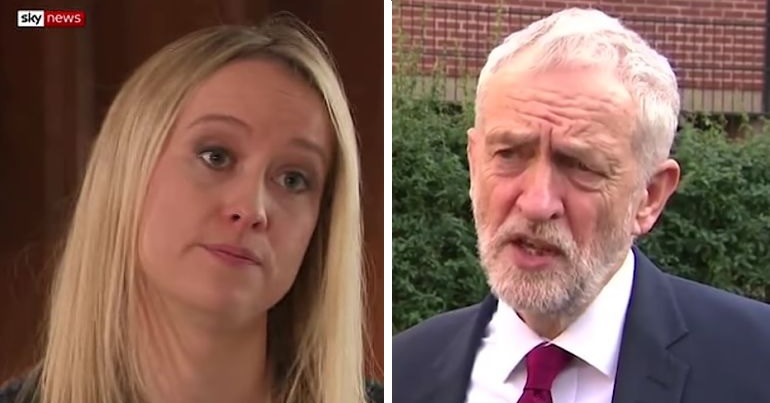 The Mail on Sunday published an absolute hatchet job on Jeremy Corbyn on 10 February. Not to be outdone, Sky News aired another during Ridge on Sunday.

But the outlet’s attack on the Labour leader came crashing down almost as quickly as the Mail‘s did.

Not on my watch

Sophy Ridge interviewed Tony Blair on 10 February. After the show, she took to the Sky News website to wax lyrical about the man who conspired with the US to destroy Iraq. She was fawning:

Whatever you think of his politics, Tony Blair is a refreshing person to interview because he engages with whatever questions you ask without trying to bat them away (and makes me realise how rarely that happens in the world of politics).

One of the topics Ridge ‘engaged’ in with Blair was antisemitism in Jeremy Corbyn’s Labour Party. Never one to ‘bat away’ this particular subject, Blair quickly rolled out an antisemitic trope to argue his point. He said that he sees antisemitism in “parts of the left” in their “attitudes to the state of Israel”. Conflating Jewish people with Israel is an antisemitic trope. He also claimed the Labour leadership hasn’t been “robust enough” on the issue. Blair then shared this nugget:

So, according to Blair, antisemitism didn’t raise its ugly head in the party when he was leader enough to merit a conversation. There’s just one problem with that.

As Tory Fibs argued on Twitter, accusations of antisemitism in Labour did happen on Blair’s watch:

Today, Tony Blair claimed there was no antisemitism under his leadership. The Press did not challenge that claim. Here are 4 pieces of evidence that prove he is wrong.

The “evidence” includes the party facing flak for antisemitism over an attack poster it created about then-Conservative leader Michael Howard. It also features the criticism Blair faced for not taking decisive action over the alleged antisemitic targeting of his “personal fund-raiser” Lord Levy. It even includes a reminder that Luciana Berger condemned the UK’s political parties, including the Labour Party, for their “approach” to immigration, claiming it “has a lot to say for the rise in not only anti-Semitism but any form of racism directed at immigrants” in 2005.

In Sky News‘s Ridge on Sunday interview, Blair voiced support for Berger. She is currently at loggerheads with her constituency Labour Party over her politics and the issue of antisemitism. The former Labour leader expressed disbelief that Berger could be in that position.

As Tory Fibs says though, Ridge didn’t challenge Blair on his claim that antisemitism wasn’t a problem when he held the reins. So, if no-one in the media has had a ‘conversation’ with the former Labour leader about it, it’s not because it wasn’t an issue. It’s just that the British media is as shitty now as it’s always been at doing its job. When it comes to war-hungry, media mogul-friendly neoliberal politicians, the British press rarely holds them to account.