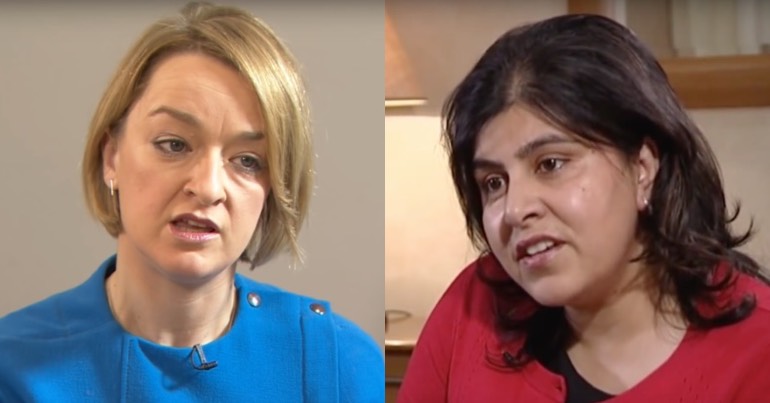 It appears that the BBC’s political editor, Laura Kuenssberg, has finally been embarrassed into highlighting racism in the Conservative Party.

But her tweet hints at BBC bias against Labour and the media’s double standards on racism. And the push back online has been fierce.

Why is the BBC ignoring Conservative Party racism, Laura?

In light of the relentless media focus on alleged antisemitism in the Labour Party, online activists are questioning news values. And people are rightly asking: why do the media ignore evidence of the Tories’ obvious racism while obsessing over Labour’s?

Dear @bbclaurak , I’m one of millions who fund your #BBC job. You have 34,500 tweets but:
– 0 tweets on #Islamophobia
– 0 tweets on @SayeedaWarsi concerns abt #ToryRacism
– 0 on Bojo's Burkha jibes
– 1 on Zak Goldsmith's racist Mayoral campaign

“On different political scale” – you can’t be serious?

This is on different political scale but tories also have a problem here 👇🏼 https://t.co/PV1tpxDWsM

And people are now rightly asking: what does on a, “different political scale” actually mean?

Who sets the political scale? It's politicians and political journalists

Please explain how you've determined that institutional Islamophobia in the Tory party is on "different political scale" (different to what?). What metrics/stats/other did you use?

A hierarchy of racism?

Novara Media’s Ash Sarkar spoke for many who felt Kuenssberg’s tweet could be interpreted to support a hierarchy of racism:

Got a lot of respect for Laura Kuenssberg.

But the way this tweet is worded creates a hierarchy of racism in which Islamophobic attitudes are presumed less prevalent in the Tories than AS in Labour (which evidence contradicts), or considered as being less politically important. pic.twitter.com/WNVOCquRVJ

One Twitter user also suggested that Kuenssberg’s choice of language belittled the problem:

@SayeedaWarsi has said the Conservative Party is institutionally racist.

Sounds like you’re trying to minimise the problem, Laura

Another hit the nail on the head, as the Conservatives are actually in power and require more scrutiny:

What do you mean “on a different political scale”? Possibly because they are the govt and have the institutional power to act out their racism, you do know that May’s hostile environment has actualy killed people , right?

Conservative racism ‘On a different political scale’ because of media choices?

A number of other critics argued that Conservative racism is on a different political scale because the media Kuenssberg is part of simply choose not to focus on it:

'On a different political scale'. Or, in other words, a much larger problem within the Tory Party, dwarfing the 0.08% of the Labour membership expelled for antisemitism, just because it has not been amplified by the media you represent, out of all proportion, for political gain.

And as another user put it:

It's on a different scale because media hacks like you downplay any wrongdoing by conservative whilst unfailry lambasting Labour whatever they do. Labour has very real problems regarding antisemitismm but the perception that it is much bigger than it is, is driven by the media

The double standard needs to end

because of the row over antisemitism you’ve got away with this.

Neil’s comments accidentally shed light on the hypocrisy of the media and its failure to adopt a balanced approach to the two issues. People rightly question why the media obsesses over Labour antisemitism, yet ignores Tory Islamophobia. Why is one a two-year long scandal and the other a forgotten footnote?

The media’s focus on antisemitism isn’t inevitable, it’s a choice. And so Neil should more accurately have said to Smith of Islamophobia: ‘because we the media have no interest in holding the Conservative Party to the same standards over racism as Labour, we have let you get away with it’.

Time to address a serious problem

As a report by HOPE not hate, states:

Until journalists like Kuenssberg stop treating Conservative Party racism as on a different political scale, the problem will not be addressed. This means British Muslims will suffer. And in the meantime, one political party will have its reputation smashed while another goes scot-free.