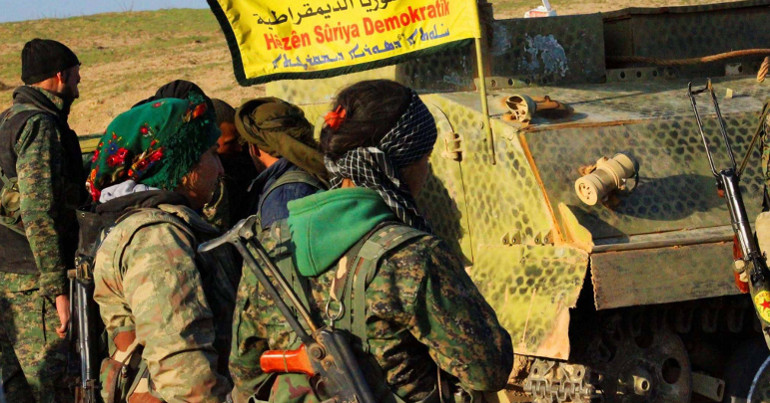 The Syrian Defence Forces (SDF) are likely to defeat what they believe are the last remnants of Daesh (ISIS/Isil) in Syria. The operation against Daesh began in the eastern Syrian village of Baghouz on the evening of 1 March.

Although the SDF can’t predict when they will liberate Baghouz, a spokesperson stated, “we expect it to be over soon”.

We are right now in #Baghouz.
Righg now from our activist on the front: "The fight is still ongoing. Yesterday night 4 comrades were wounded but also alot of isis fighters were killed. Some say like 600-900 ISIS fighters are in the town. No airstrikes right now. "

Meanwhile, Kurdish media reports that international Daesh fighters who have been cornered in Baghouz are surrendering.

13,000 people have fled Baghouz village, as well as the wider Deir ez-Zor region, in the last week. According to the UN, 90% of them are women and children. A massive 45,000 have evacuated since December. Most people are arriving at Al-Hol refugee camp in Hassekeh, with a large number of children suffering from severe acute malnutrition.

A UN spokesperson stated that:

84 people, mainly children under-five, died either on their way to the settlement or shortly after arriving at the Al-Hol camp.

The Kurdish-led SDF fighters have been backed by the US in their years-long struggle against Daesh. But it is the US (and its ally the UK) that gave rise to Daesh in the first place when it invaded Iraq.

Meanwhile, the UN states that:

46% of hospitals and primary health facilities [in Syria] are partially or not functional. The estimated number of people in need of health assistance is 13.2 million.

While Syrian civilians suffer, US and UK arms companies continue to make massive profits. Back in 2015, Lockheed Martin’s Bruce Tanner boasted that the company was getting “indirect benefits” because of the war in Syria.

According to the Stockholm International Peace Research Institute, the international trade in arms is now worth about $100bn (£74bn) per year, and it continues to rise. As the world’s leading arms exporter, the US will carry on reaping the benefits from the instability it has caused in the Middle East.