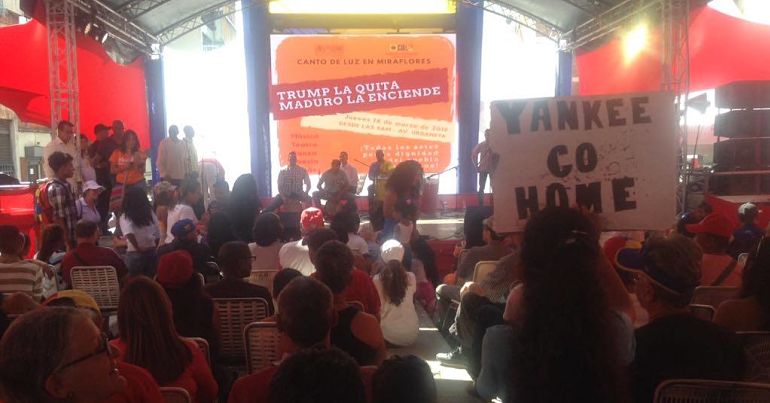 On 16 and 17 March, protesters around the world gathered to tell US president Donald Trump: “Hands off Venezuela”.

As the US-backed coup attempt in Venezuela loses steam, global solidarity seems to be growing stronger.

The Canary was on the ground in Venezuela to speak to protesters.

On Avenida Urdaneta in Caracas, Venezuela’s capital city, thousands gathered to protest ongoing US intervention in the country:

Today's chavista anti imperialist march in Avenida Urdaneta, Caracas. Share widely as you won't see it on CNN and The Guardian won't report it. #HandsOffvenezuela pic.twitter.com/TX1nxECy79

The mood was joyous and calm; bands played on stage and protesters danced.

The Canary asked one government supporter (or ‘Chavista’) about the effects of US sanctions on the country. They said:

If there were no sanctions, we’d be even happier.

Saturday’s protests rolled into Sunday, as many Chavistas re-convened on Avenida Urdaneta. Half of the avenue had been converted into a pop-up sports complex, looking onto the main tent hosting the rally. Throughout the day, children rode bikes, played football, and boxed on the street. Inside the tent, bands played and attendees danced Tambor – a dance originating from enslaved people from Africa. 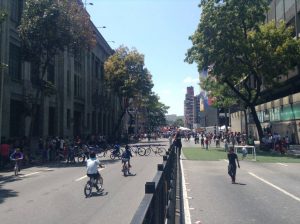 In between the music, government officials took the microphone to discuss the political situation in Venezuela. Much of the conversation focused on Venezuela’s economic crisis and foreign economic pressure. “We’re fighting against the gringo mindset,” claimed one speaker, as protesters held “Yankee go home” placards. 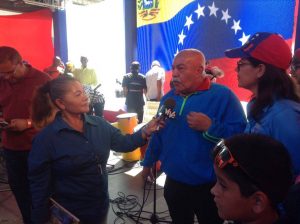 The Canary spoke to Venezuelan vice-minister of tourism Inair Manzur at Sunday’s event. She talked about the Western media’s highly negative representation of the country and its effect on the country’s tourist industry. “We have so many beaches, so many places people could visit,” she said, “but tourists are put off by the negative publicity.”

Aldrean, a councillor in Caracas, told The Canary about Venezuela’s recent electricity blackout. He seemed to have few doubts that it was the result of sabotage by pro-coup forces. But he said:

Even when things were at their worst – without water, without light – people went out onto the street and marched. That’s how I know they won’t beat us.

The US and the UK

As they have previously, groups also gathered in the US and the UK to condemn their governments’ actions in Venezuela. Journalist Ben Norton reported from Washington DC:

“It’s like the media here is on another planet. [It’s] so outrageous. It’s one of most egregious campaigns of lies I have ever seen. Being in Venezuela reminded me how authoritarian my own gov’t is”

Scenes outside the White House today: “Hands off Venezuela” protest in Lafayette Park, and an anti-Maduro demonstration in front of the WH. (Plus flyers for a Sunday afternoon protest against Brazil President Jair Bolsonaro, who visits Trump this week.) pic.twitter.com/pIioAWcfIK

Protesters also gathered in Los Angeles, with placards calling US secretary of state Mike Pompeo a “shameless imperialist” and US special envoy to Venezuela Elliott Abrams a “genocidal grifter”:

Protesters gathered in London too, after a series of recent protests demanding the Bank of England release Venezuelan gold:

Only two countries in all of Africa and Asia (Israel and Morocco) recognise Venezuelan opposition leader Juan Guaidó as Venezuela’s ‘interim president’. And as part of the weekend’s protests, South African trade unionists marched in front of the US consulate in Johannesburg:

The amount of solidarity with the People of Venezuela, shown by revolutionary South Africans, Africans in general, and people of the global south on a regular basis is absolutely incredible.

Global opposition to imperialism is vital, as it can be mobilised to confront any future US-backed intervention. And the current message of anti-imperialists is resounding: Hands off Venezuela.