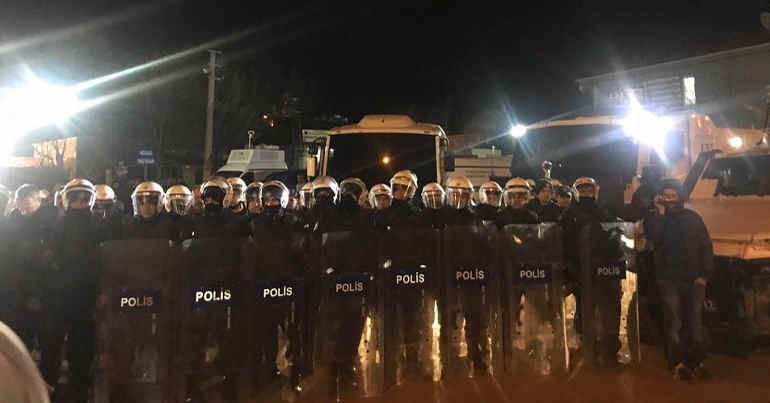 The Turkish state has once again shown a disgusting disregard towards its Kurdish population.

Hunger striker Zülküf Gezen died in a Turkish prison after reportedly taking his own life. He was one of thousands of Kurdish people on hunger strike around the world, protesting the solitary confinement of imprisoned Kurdish leader Abdullah Öcalan.

Gezen’s funeral was planned for Monday. The pro-Kurdish Peoples’ Democratic Party (HDP) had called for a massive turnout at the ceremony.

But the Turkish state took Gezen’s body in the middle of the night and transferred it to Amed (Diyarbakır) without the grieving family’s knowledge. Once in Amed, Turkish officials told the family that the burial would occur in the dark. The funeral took place hurriedly, surrounded by a massive armed police blockade. Only a few relatives were present, and the police prevented HDP politicians from getting anywhere near.

Riot police at the cemetery

The following morning, armoured vehicles and riot police surrounded mourners at the cemetery. Police fired at them with water cannons and prevented them from reaching Gezen’s grave.

Turkish state’s message to the Kurds is clear: You, as a Kurd, don’t deserve the basic human rights like to have a grave or to be buried by your loved ones. #Amed #ZülküfGezen

Don’t rely on the mainstream media

Of course, the mainstream Turkish media has downplayed Gezen’s death as the suicide of a “PKK terrorist” (see more here on the Turkish state’s highly questionable use of the word ‘terrorism’ to justify its abuses). There also seems to be no mention that he was one of the international hunger strikers. Turkey’s media puppets don’t want to draw attention to the fact that people around the world are starving themselves because of state policies.

It’s also unlikely that the international mainstream media will mention Gezen’s death at all.

The condition of hunger striker Nasir Yagiz, meanwhile, is getting more and more critical. He has been without food in Hewler (Erbil, Iraqi Kurdistan) for 118 days. He is losing his eyesight and is refusing medical treatment.

Time is running out fast for people like Nasir. “Now is the time for action,” tweeted Mark Campbell from the Kurdistan Solidarity Campaign. “Whatever your capacity, raise support for the hunger strikers’ demands.”