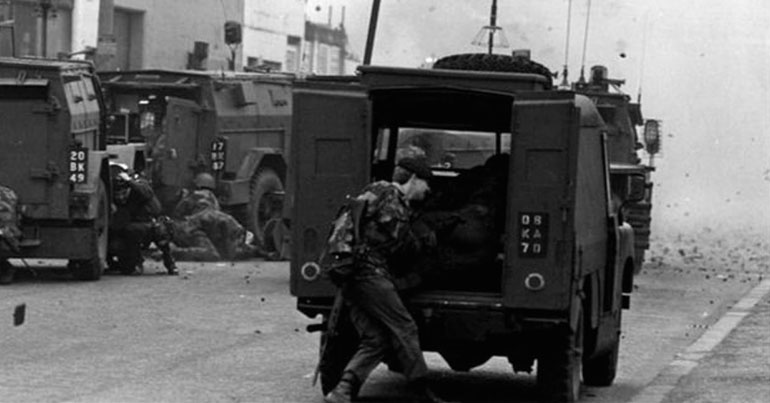 A far left Irish republican organisation is demanding that all military personnel involved in the Bloody Sunday massacre be tried at The Hague. This comes after the prosecution service in the north of Ireland ruled that only one person would face the courts for the murder of two civilians.

This also comes at a time when there’s an increase in tension in the north with the ongoing uncertainty over Brexit and the recent attacks attributed to the ‘New IRA’.

Fourteen people died on Bloody Sunday when military personnel with the Parachute Regiment opened fire on civilians taking part in a protest against the introduction of internment without trial. But just one soldier will face prosecution, for the murder of James Wray and William McKinney and the attempted murder of Joseph Friel, Michael Quinn, Joe Mahon, and Patrick O’Donnell.

Now far left republicans Saoradh are demanding that all military personnel involved in the massacre, including officers, should face prosecution in the International Criminal Court at The Hague.

This continuation of the denial of justice to the victims and their families is symptomatic of the injustice of British occupation.

All those who murdered and injured civilians, their commanders and those at the highest echelons of the British Government that directed the Parachute Regiment to do so should be in front of an International War Crimes Tribunal at The Hague.

The Bloody Sunday investigation by the British PPS, and we use the term investigation lightly, amounts to an effective whitewash and further demonstrates that Britain cannot be trusted to investigate itself and their murderous activities.

And it was only the year before Bloody Sunday that military personnel in the same regiment were implicated in what became known as the Ballymurphy massacre.

Bloody Sunday resulted in the Widgery Tribunal report, which was a whitewash. Later came the Saville inquiry report, which agreed that those killed in the massacre were innocent civilians. However, that inquiry failed to publish the transcript of testimony provided by British agent Ian Hurst, who was an intelligence operative with the undercover Force Research Unit (FRU).

In the transcript (marked ‘Restricted’) Hurst (aka Martin Ingram) contended that no shots were fired at the military by the protesters. He also testified that the allegation that Martin McGuiness, the former Deputy First Minister Northern Ireland (and a leading Provisional IRA member) had fired the first shot in the massacre was untrue:

At FRU I saw documents relating to Martin McGuinness’ activities on the day, both before and after the march. They related to what he was doing and who he was with. I saw none that suggested that he had a machine gun in his hand or fired a shot. I think that they were surveillance reports not source reports. McGuinness was being targeted. If you have a surveillance unit deployed as they were then it would make sense for McGuinness to be a prime target. The documents that I saw suggested that he was closely observed, I don’t think that ìt would have been feasible to do it from the Derry Walls or the Masonic Hall.

Meanwhile, defence secretary Gavin Williamson intends to introduce legislation that places a 10-year limit on prosecuting army veterans for alleged offences. Not forgetting outstanding allegations of British collusion in the killing of paramilitaries and civilians in the north:

But in the wider context of the north of Ireland, there are other, more contemporary, forces that cannot be ignored.

The emergence of a ‘New IRA’ was first reported on in July 2012. It boasted “several hundred armed dissidents” and included the Real IRA, Republican Action Against Drugs and Óglaigh na hÉireann, a coalition of smaller republican groups.

In May 2016 the Police Service Northern Ireland (PSNI) claimed there had been 52 bomb attacks in the north of Ireland over the previous 12 months and suspicion fell on NIRA. NIRA is also accused of the murder of prison officers David Black and Adrian Ismay in separate incidents. Further, the PSNI accused NIRA of placing 46 explosive devices during 2017/18 and of conducting punishment shootings.

More recently, in January 2019, the Derry courthouse was targeted via a car bomb, which the PSNI blamed on NIRA.

This is the dramatic moment a suspected New IRA car bomb explodes outside a Londonderry courthouse https://t.co/wCnxOqE1CA pic.twitter.com/Cmk8bodp0p

In March 2019, four letter bombs were posted, each to British targets, and it was reported that NIRA claims responsibility.

The group, which identifies as the IRA, but is widely referred to as the New IRA, said that there was a fifth device in addition to those sent to the University of Glasgow, Waterloo station in London and Heathrow and City airports https://t.co/nQuOre7D55

In response to these incidents, the British Army has deployed “Special Reconnaissance Squadron officers of the SAS”.

As with Saoradh, the New IRA is vehemently opposed to the Good Friday Agreement, which it sees as a “phoney” deal. But while Saoradh argues for a united Ireland (with a socialist agenda) it also argues that Ireland would be better off outside the EU.

In contrast, Sinn Féin opposes any Brexit arrangement, particularly a ‘no deal’ scenario, that results in the return of a hard border between the north and south of Ireland. Under such circumstances, it would advocate for a referendum, provided for by the Good Friday Agreement, on reunification.

While discrimination against Catholics was arguably the main cause of conflict in the north of Ireland, Brexit provides another dimension, with the border issue adding to security concerns. And with a Conservative-led British government dependent on the terrorist-linked DUP (Democratic Unionist Party) those concerns may only worsen.

Also, the ruling that only one soldier will face prosecution over Bloody Sunday only serves to emphasise the colonialist attitude that still persists within the British-run establishment in the northern part of Ireland.