If all adults faced what children have to face, US gun laws would change immediately - Canary 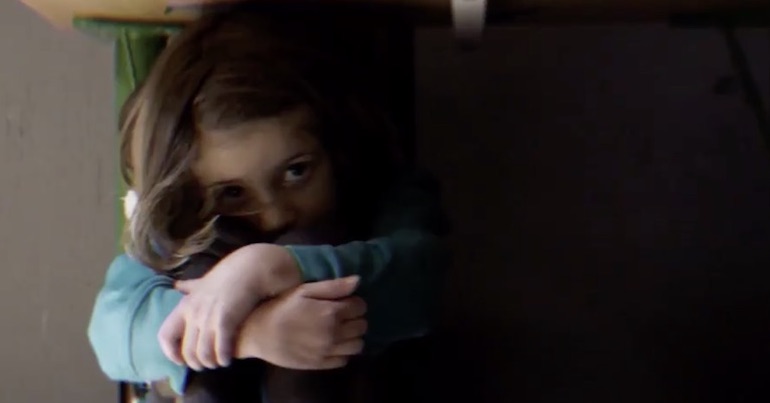 A viral video has exposed the brutal implications of US gun laws for children.

The video, produced by campaign group March For Our Lives, lays bare the truth about school “active shooter drills”. An estimated 95% of all US school children regularly undertake these to teach them how to act in a live shooter scenario.

The video shows a young girl – called Kayleigh – sharing her expertise with a group of adults. The adults look stunned when the “expert” walks in. And as she gives guidance, many are clearly moved. “If there was an active shooter,” she begins, “you’d all be dead.” Because as she continues:

When you talk out loud, the shooter can tell where you are and where you’re hiding… And you can’t cry. It gives away your position and your hiding spot.

Every adult should watch the video:

**Heads up: this video contains sensitive content**
We want to learn without fearing for our lives.

We want to learn without active shooter drills.

We want a better solution to the gun violence epidemic – and we won't settle for less. #GenerationLockdown pic.twitter.com/HngghKmSsx

Laws now require schools in 32 states to have some kind of active shooter drill, first introduced after the Columbine High School massacre in 1999. Since 20 children and six adults were killed at Sandy Hook Elementary School in 2012, “there have been at least 2,031 mass shootings” in the US. These killed “at least 2,310” people and wounded another 8,445.

As one group said in response to the video:

We are experts in active shooter situations…. experienced hiders and runners. We are #GenerationLockdown.

Another group explained the implications of these drills:

Students should be worried about when their next math test is, who they’re taking to prom, and what they’re having for lunch – NOT what they’ll do to survive in an active shooter situation. #GenerationLockdown.

And as activist Emma González said, it’s vital for adults to understand this reality:

Those adults who don’t think gun violence can happen to them, the reason they think that is because they don’t have to do active shooter drills like their Kids do. Watch this Video. https://t.co/xJrz4VyWxI

González survived a shooting at Marjory Stoneman Douglas High School in Florida where 17 students and teachers were killed in February 2018. As The Canary reported, young survivors of this massacre sent an unequivocal message to Donald Trump. They criticised his response to the tragedy and demanded a review of US gun laws. Many survivors have led the campaign to change gun laws since then.

Demands to change gun laws, however, are politically divisive. Because the National Rifle Association (NRA) is a powerful force in the US. It has spent “tens of millions of dollars… in support of gun rights”. Since 1989, the NRA and “gun rights interests” groups have also given “about $41.9 million” to election candidates and parties. Around “90 cents” of each dollar “went to Republicans”.

After nearly every mass shooting in the US, a stream of predictable responses emerges. Everyone insists that there’s an abundance of ‘thoughts and prayers’ for those killed, their families, and the survivors. But as March For Our Lives states:

Thoughts and prayers aren’t going to put a stop to gun violence. It will take all of us advocating for sensible gun violence prevention reforms to make it happen.

Trump, Republicans and anyone clinging to existing gun laws should take note. Because the generation working to change these laws are a powerful force. Many are approaching voting age. And they’ve had enough. They’ve already witnessed too much violence, and they’re demanding the right to live and study in peace; as all children should.