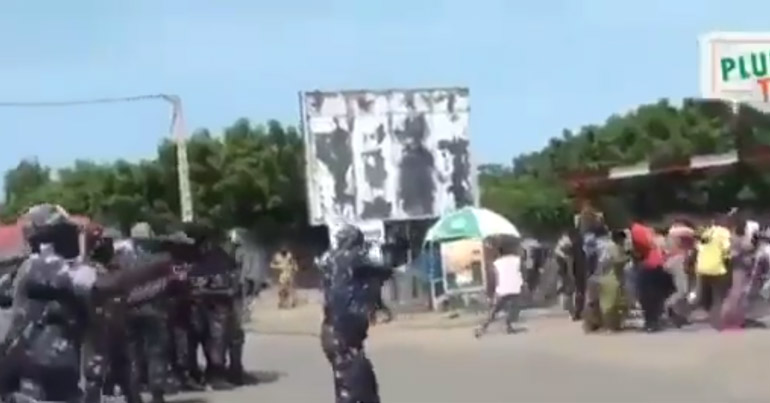 Protests erupted in Benin, western Africa, after a controversial election in which there was effectively no opposition party. Police were later filmed shooting at the protesters.

Benin has been called “one of Africa’s most stable democracies”. It also receives millions of pounds’ worth of arms from the West, despite high levels of corruption and inequality. The US has called its relationship with Benin in recent years “excellent”.

Benin held parliamentary elections on 28 April. However, people across the country boycotted it because they said the ballot offered only one choice: President Patrice Talon (one of the richest leaders in Africa). Although two parties ran, both were allied to Talon. This came as a result of tough new electoral laws that Al Jazeera said “effectively barred the entire political opposition from fielding candidates”. Talon has also reportedly sought to rig elections in favour of wealthier candidates.

The boycott led to a 27.1% voter turnout. France24 said all previous elections had seen at least a 50% turnout. Meanwhile, Al Jazeera reported that authorities “cut off the internet on the day of the vote”. As a result, within hours of polls closing, people took to the streets of the country’s largest city, Cotonou. Many of these are allegedly supporters of former president Boni Yayi, who called on the public to “resist” Talon.

Twitter user @DevidyalG, an “international school teacher” living in Benin, shared photos and videos she said portrayed what was happening on the ground. They include crowds on the streets:

#benin #votersuppression #protest riots in the streets here in Cotonou. They'll probably shut the internet off again. I'll post while I can. pic.twitter.com/xG7tK0UgwZ

Police shooting at protesters with what appear to be non-lethal weapons:

The police are shooting at the people. #RiotsBenin #benin #cotonou pic.twitter.com/J7OzOcuzxG

And even a machine gun set up on the road:

Set up outside my house. Someone important must live on my street. A tank and many armed soldiers. #benin #votersuppression pic.twitter.com/bFQ6yvX2Z9

Another Twitter user shared a video of soldiers and the sound of gunfire allegedly outside ex-president Yayi’s home:

On the other hand, the Benin government’s official Twitter account asked people to check out state media to cut through what it called “fake news” on social media. And German newspaper DW reported that Joseph Djogbenou, president of the country’s constitutional court and Talon’s lawyer, said the “disturbances” wouldn’t “compromise the validity… of the vote”.

The UN asked for “restraint” by government forces following the violence, with spokesperson Stephane Dujarric saying:

We note with concern the ongoing tensions and unrest, resulting in the destruction of property and high-handed response from the security forces. We call on all Beninese stakeholders to exercise maximum restraint and to seek solutions to their differences through dialogue.

Some reports said protests had died down by late evening of 2 May.

BBC News described the state as “one of Africa’s most stable democracies” on 29 April. But the latest election has led some commentators to question if that’s still true. Campaign Against Arms Trade, meanwhile, lists Benin as a corrupt country with “very high” inequality. It also showed tens of millions of pounds of UK and EU military export licences during the last three years, as well as €5m of arms exports from France.

People have previously protested against Talon’s programme of privatisation. In June 2017, for example, people were angry about his decision to sell off Cotonou’s port. And in August 2017, Public Services International (a global federation of unions) reported public-sector workers saying Talon’s heath-system reform would be “suicidal for the people of Benin”.