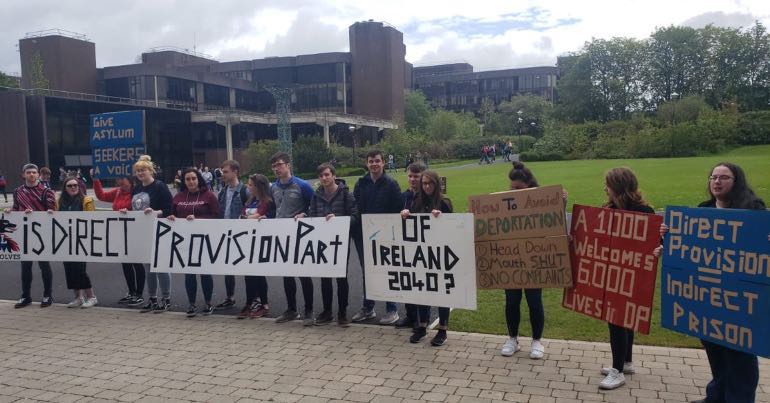 Students at the University of Limerick (UL) protested against the poor treatment of asylum seekers during a visit by Irish prime minister Leo Varadkar on 2 May.

Varadkar was visiting the university with finance minister Paschal Donohoe. Both men were at the university to give an update on Ireland’s national development plan for 2040. Members of UL Student Life, the “representative body” for UL students held a silent protest. The students were highlighting the continued use of ‘direct provision’ by the government to house asylum seekers. Direct provision is the system under which asylum seekers are given accommodation while awaiting a decision on their asylum applications. UL Student Life welfare officer Lorcan O’Donnell described direct provision as “not fit for purpose” and “inhumane”.

On Twitter, UL Student Life asked if direct provision will be part of Ireland for the next 20 years:

Our Student Officers organised a silent demonstration against the direct provision system today to greet An Taoiseach @leovaradkar & Minister for Finance, Public Expenditure and Reform @Paschald

We are here today to… express our anger at the direct provision system. We feel the system is not fit for purpose. It’s inhumane. It strips asylum seekers of their dignity and respect.

And discussing the history of direct provision, he also pointed out that:

Some of the protesters also wore tape over their mouths. This was to highlight the fear that many people living in direct provision have of speaking up:

Students wore duct tape on their mouths to symbolise those that live in direct provision’s fear in speaking up in case it would negatively affect their asylum application.

Although the students did not get to meet Varadkar, Donohue did speak to them. O’Donnell explained:

He came over and spoke to us. He did make a comment that he thought Ireland was doing quite well in terms of its integration projects.

Later on, the president of UL Student Life, Ciara Jo Hanlon, met with Varadkar. She gave him a letter from Irish student groups calling on the government to find an alternative to direct provision:

Direct provision is controversial in Ireland. As The Canary previously reported, many people living in direct provision wait years for the government to process their applications. The government also gives them a weekly allowance of only €38.80, an increase from the previous figure of €21.60 but still very low. Often, the accommodation itself is unsuitable and cramped.

Many people spend years in limbo while in direct provision. Some of them are fleeing persecution and war. And with this in mind, the government must either improve direct provision or get rid of it.