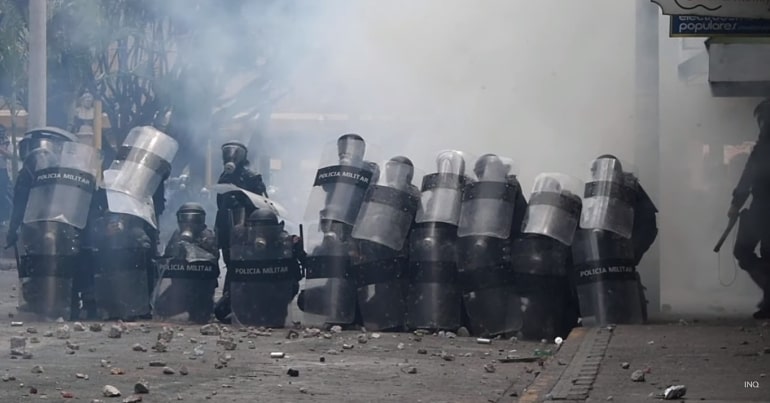 The Honduran capital of Tegucigalpa has seen massive protests this week against controversial president Juan Orlando Hernández. Many Hondurans are angry that their government, which gained power through a reportedly fraudulent election in 2017, had planned a major wave of privatisations. The US government has also played a key role in the destabilisation of Honduras since 2009 (and for many decades before that), which seems to explain why events in the country have received little to no coverage in the corporate media.

The protests began in response to government plans to privatise healthcare and education. One outlet reported that:

The plans to privatize social programs are expected to cause mass layoffs of teachers and doctors. Demonstrations protesting the plans have been held across the country.

Many of the protests turned violent in Tegucigalpa. Police clashed with protesters; and the latter reportedly set fire to government buildings:

While the media is fixated on the attempted coup in #Venezuela, they are completely silent on the riots in #Honduras, where a government building was set on fire. That's because the president is a US puppet installed after the 2009 Obama-Hillary coup, so nothing to see here. pic.twitter.com/i6xlLM25iA

#Honduras: Today, a new day of protests against the privatization of health and education. Protesters confront police in #Tegucigalpa. #FueraJOH #HondurasEnCrisis pic.twitter.com/deuwPxhWq3

Several buildings, including the offices of the capital’s mayor, were burned in Honduras during protests against government-proposed reforms.

On 2 May, Democracy Now! reported that the government had made important concessions:

lawmakers say they’ll suspend ratification of a pair of bills that would restructure the ministries of education and health, after massive protests in the capital Tegucigalpa saw protesters clash with riot police.

A US ally under pressure

Despite forcing concessions from the government, many Hondurans will remain dissatisfied with their political situation. The 2017 election in Honduras was marked by controversy, ending with victory for US ally Hernández. According to the Intercept:

the election results came in choppy waves: first a sizable lead by Hernández’s opponent, Salvador Nasralla, and then the electronic voting system went off the air. When the system came back up, Hernández was winning.

International observers then claimed that:

There are strong indications of election fraud in Honduras.

Since 2009, Washington has continued to support Honduran administrations marked by authoritarianism and widescale human rights abuses.

As Peter Bolton wrote for The Canary, Washington’s selective concern over countries like Venezuela and Honduras shows:

the brazen double standard that the US takes towards obedient countries – those that serve US geopolitical interests and follow neoliberal orthodoxy – and independent (and usually left-of-centre) governments that defy those interests and resist neoliberalism.

It’s also important to contrast the corporate media’s reaction to recent events in Honduras and Venezuela.

After Venezuelan opposition leader Juan Guaidó attempted an armed insurrection on 30 April, the world media was watching. Even though four groups of international observers who monitored Venezuela’s 2018 election found it was clean, the media has consistently labelled Nicolás Maduro a “dictator“.

Meanwhile, the corporate media has largely ignored the protests in Honduras against a government understood to have gained power by fraud. Former US presidential candidate Jill Stein took a stab at why this editorial oversight might occur:

As the corporate media outlets focus on Venezuela, it’s well worth considering what they’re ignoring – and why.