Corporate media pundit wants the US to be doing *more* meddling in Venezuela... because 'Russia' - The Canary 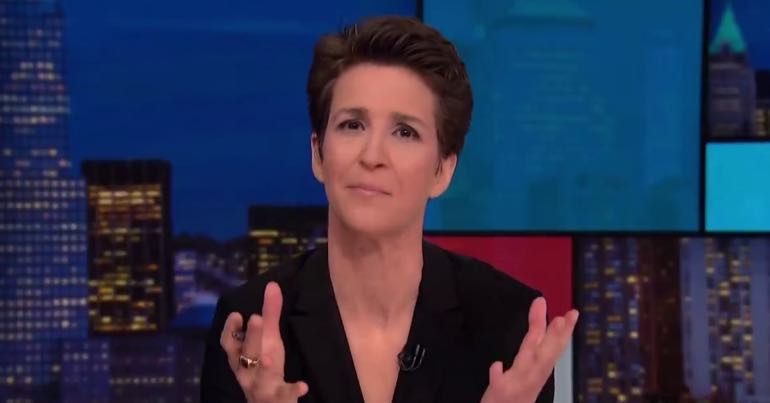 Corporate media pundit Rachel Maddow has said the US should be threatening Russia because of its supposed involvement in Venezuela. This is despite months of heavy US intervention in Venezuela, and thousands of Venezuelans reportedly dying as a result of intensified US sanctions in recent years.

Speaking on her MSNBC show, Maddow appeared to support national security advisor (and notorious warhawk) John Bolton and his approach to Venezuela to counter Russian ‘involvement’ there. She went on to accuse Donald Trump of believing Vladimir Putin over his own advisors when Putin says he’s not involved in Venezuela. She also claimed Russia was propping up elected Venezuelan president Nicolás Maduro, whom she referred to as a “dictator”.

Maddow has continuously pushed a conspiracy-like ‘Russia is behind everything’ theory, particularly in relation to Trump’s election as president. Because of this, she believes Trump is a Russian puppet.

Maddow argued that the entire Trump administration is certain of Russian interference in Venezuela; but after Trump spoke to Putin, he claimed the opposite. She then seemed to feel pity for Bolton and secretary of state Mike Pompeo who, she said, should be trying to bully Russia:

You each thought your job this week was to name and shame, and threaten, and counter Russian government involvement in Venezuela while sabre-rattling about how everybody else better get out of the way because the US is really mad about it.

Guys, turns out your actual job is figuring out how and why you work for a president who says whatever Vladimir Putin tells him.

Again pitying Bolton, she argued that we should see him “as a human being” and sympathise that he won’t get to start a war with Russia in Venezuela.

So the US bullying foreign nations is good, but Russia allegedly interfering in the US is bad, apparently.

Shocking MSNBC segment in which @maddow sympathizes with poor John Bolton who has a tough job bc he wants to go to war against Venezuela but Trump is not complying bc Putin. No joke, that’s actually what she says https://t.co/COYVVtZNfB

But this is nothing new for Maddow. Her record speaks for itself. She has claimed that Russia stole the 2016 election to put Trump in power as one of its agents. And during a cold snap in the US in January, she argued that “Russia can just shut off the electricity” because:

Moscow is mapping our critical infrastructure with the long-term goal of being able to cause substantial damage.

In 2017, she also argued that Russia might blackmail Trump into removing US troops from the border with Russia (which didn’t happen). She said:

Maddow has gone so far to claim that a pro-Trump hashtag was a Russian initiative “to destroy American democracy”:

18/ or when you recently claimed that the hashtag #Kids4Trump
was part of a Russian effort "to destroy American democracy." How much contempt do you have for American democracy to suggest that Russian trolls could "destroy" it? pic.twitter.com/WcuG1RibkB

She has also proposed that Putin might be able to give orders directly to Trump:

6/ There was that time when you explored the scenario under which Putin "gives orders" to his puppet Trump at an upcoming meeting. Do you think Putin ordered Trump to stage a coup in Venezuela/try to kill the German-Russia gas pipeline/nix the INF treaty? pic.twitter.com/cbSrGt2xR3

With the Mueller Report not delivering, meanwhile, she has doubled down on her Russophobia.

Maddow’s comments are nothing new, but the stakes are high. Trump’s finger is on the nuclear button, and the Doomsday Clock (measuring “how close we are to destroying our world with dangerous technologies of our own making”) is at two minutes to midnight. Given this, Maddow’s obsession with ramping up hostility towards Russia is at best irresponsible.

By continuing to stir up hatred and fear, she’s putting everyone at risk.