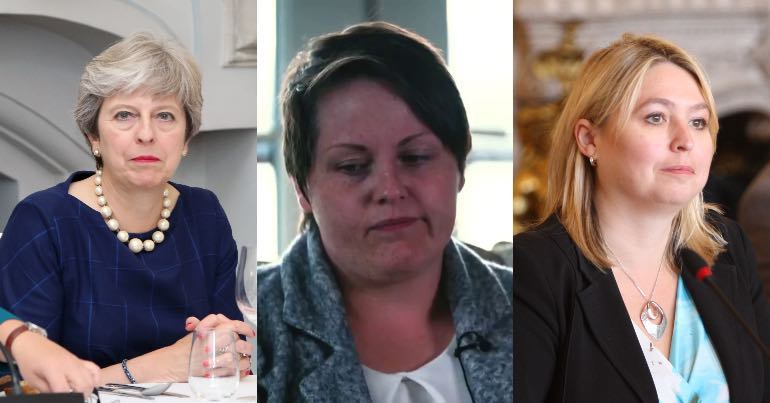 The partner of murdered journalist Lyra McKee has revealed that she personally criticised Theresa May and Karen Bradley. Speaking to Channel 4 News, Sara Canning described how she verbally confronted both politicians when they attended McKee’s funeral. She said that she “saw red” when she realised which politicians were in attendance.

McKee was murdered by the New IRA on 18 April. She was shot while covering a riot in Derry.

In the interview, Canning revealed that she was particularly critical of May at the funeral. May held up the proceedings due to being late, which Canning pointed out she was not pleased about. After May offered her condolences, Canning “saw an opportunity”. She said:

I basically told her that she was massively derelict in her duties to Northern Ireland.

She also told May that “successive governments” have ignored their responsibilities to the north of Ireland. And she went further, saying:

I told her that to tell us that issues like gay marriage and abortion rights are a devolved matter is completely out of order. We’re not a devolved state anymore. We’re completely unsuccessful. It has been shown that we can’t work together, so the British government has to be our government, and they have to be our voice, and they have to do better.

The government in the north of Ireland collapsed in 2017 because of the DUP’s role in the Renewable Heat Incentive, or “Cash for Ash”, scandal.

"I told Karen Bradley, Secretary of State, she was doing a pretty terrible job as the Secretary of State. Her lack of knowledge around Northern Ireland was appalling. She needed to go and educate herself." Sara Canning at Lyra McKee's funeralpic.twitter.com/ZoOgS3kqaI

In addition, Canning spoke to secretary of state for Northern Ireland Karen Bradley at the funeral. Upon accepting Bradley’s condolences, Canning said she told her that:

she was doing a pretty terrible job as a secretary of state. Her lack of knowledge around Northern Ireland was appalling. She needed to go and educate herself.

Canning expressed her astonishment that Bradley had accepted the job as secretary of state with “no knowledge of the area and the intricacies with Northern Ireland”. She also criticised Bradley for her comments in defence of the British soldiers who murdered civilians on Bloody Sunday in Derry in 1972. Bradley had said the soldiers did “their duties in a dignified and appropriate way”. Although she later apologised, Canning told her:

You should be ashamed of what you said.

Canning further argued that there is no difference between British soldiers murdering civilians and the New IRA doing the same.

Canning also appeared to be disappointed by Irish prime minister Leo Varadkar. Canning had told him he needs to do something to help solve the issues in the north of Ireland. She also insisted to him that as a gay man he needs to use his political power “for good”. She said that, in response, Varadkar said “Yeah, yeah” and nodded politely.

One of the most important questions we now face is what comes next? Although moves to restart the government in the north of Ireland have begun, the outcome is uncertain. Despite the massive outpouring of grief and sympathy in the aftermath of McKee’s murder, the tensions there are not going to suddenly disappear.

As a result of this, and the continuing Brexit farce, increased and even worse violence in the north of Ireland is more than a possibility.