Ann Widdecombe may be a new MEP for the region, but the South West has told her exactly where to go - Canary 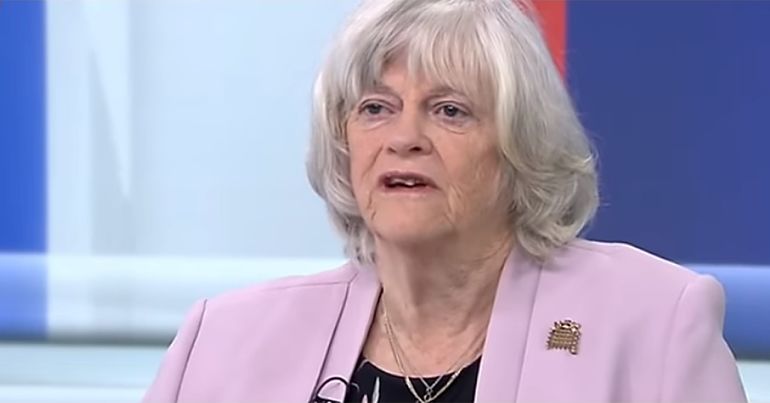 Ann Widdecombe may have won a seat in the EU elections in the South West, but the region has told her exactly what it thinks of her hateful views.

The new Brexit Party MEP was due to perform her one-woman show in Penzance, Cornwall and Ilfracombe, Devon. But theatres cancelled the bookings after she re-stated her support for so-called gay conversion therapy.

‘Cannot be supported or condoned’

An Audience with Ann Widdecombe was supposed to go ahead at the Penlee Park Open-Air Theatre on 8 June. Adverts claimed that, for £20, audiences could be regaled by the former Tory’s:

characteristic verve and integrity, Ann Widdecombe recalls her life and highlights the people and events that most influenced her along the way.

As a venue we have a wide-ranging programme of events that represent a diverse audience from across the county and we welcome a diverse breadth of performers but Ann Widdecombe’s recent remarks cannot, in any way, be supported or condoned.

David Hutchinson, chief executive of the Landmark Theatre in Ilfracombe, went further. He stated that the theatre would not “provide a stage for these vile people”.

Following her disgusting gay therapy comments over the weekend, my programming team and I immediately decided to cancel the scheduled event as we flatly refuse to offer a stage to someone who wishes to promote such vile opinion.

Now the cancellations are spreading beyond the South West. A theatre in Guildford, Surrey has also cancelled Widdecombe’s performance:

Guildford's @ElectricTheatre has cancelled a show with Ann Widdecombe following her suggestion that science could "produce an answer" to being gay. The Brexit MEP was booked for next March but the theatre manager has told BBC Surrey he no longer wants her to appear. pic.twitter.com/bFhCVuIcXA

One social media user commented that Widdecombe will probably “blame it on the gay mafia”:

Certainly, she shall blame it on the gay mafia, who have inexplicably infiltrated the theatre world and now pull the strings…

Other dates are still available on Widdecombe’s tour, as one Twitter user stated:

Ann Widdecombe appearance cancelled over gay science comments….Excellent news and hopefully other venues will follow suit and not allow her to profit from her vile views. https://t.co/IhGW93MJUQ

As Hunter said, most of these venues host “diverse” programmes. There can be no place for someone who promotes homophobic hate speech in our towns. Let’s hope the other venues follow suit and tell Widdecombe she’s not wanted anywhere in the UK.