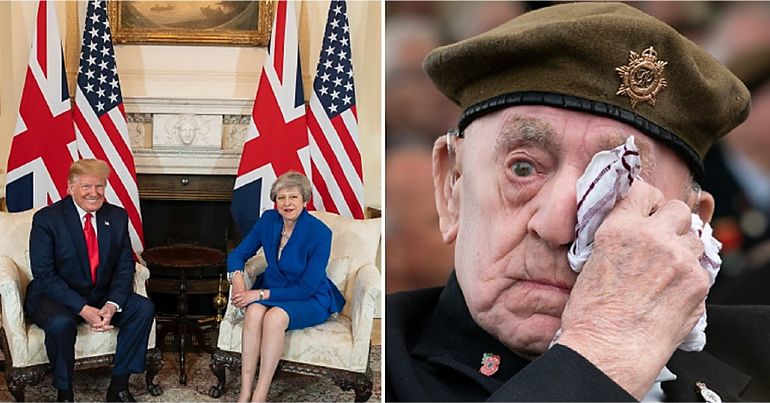 Theresa May and Donald Trump stand accused of peak hypocrisy on the 75th anniversary of D-Day. A leading pacifist group said they spoke “of peace while preparing for war” and failed to honour the memory of those who died.

“Abusing the memory of people who died on D-Day”

A press release from the Peace Pledge Union (PPU) accused May and Trump of “abusing the memory of people who died on D-Day”. Instead, the peace group said they used the “75th anniversary to ramp up support for military force today”.

A group of 16 world leaders met in Portsmouth on 5 June. French president Emmanuel Macron joined Trump and May alongside Canadian prime minister Justin Trudeau. Their joint statement pledged to ensure the “unimaginable horror” of the second World War is never repeated. The 16 signatories signed a “D-Day proclamation”, and promised to work together to “resolve international tensions peacefully”.

PPU said it was “disgusted by the hypocrisy” of this statement. Both May and Trump praised NATO and the UK’s military support for the US. As PPU noted, Trump is threatening war with Iran and Venezuela. On 1 February 2019, he also withdrew from the Intermediate-Range Nuclear Forces (INF) Treaty with Russia.

Meanwhile, Conservative leadership candidates have promised substantial increases to UK military budgets. Campaign Against Arms Trade (CAAT) claims that UK and US arms sales are propping up the war in Yemen.

Theresa May now praises the defeat of Fascism while sucking up to a far-right US President. The memory of the people who died on D-Day is being abused when politicians use the anniversary to ramp up militarism.

The PPU also said that many politicians romanticise D-Day “through constant references to heroism and sacrifice with little focus on the suffering of those involved”. It also claimed that the D-Day invasion in 1944 had “at least as much to do with securing US-UK control of Europe as with defeating Fascism”.

Founded in 1934, the PPU is the UK’s oldest secular pacifist organisation. In 1944, it called on the Allied governments to try to negotiate peace. The group notes: “On 30 June 1944, chairman Alex Wood wrote that the PPU was as committed to defeating Nazism as those who were fighting.” Wood also said at the time:

I do not believe…, in fact, that the evils which we abhor in the Nazi regime can be overcome by fighting the Nazis, much less by fighting all Germans… Many are concerned about the starvation in occupied countries and disquieted by the policy of obliteration bombing.

“Little focus on the suffering of those involved”

The PPU also sought to work with German people who were hostile to Hitler and to support resistance movements across Europe. It noted that “millions more people died” after D-Day. The PPU said that Allied powers suppressed left-wing anti-Nazi resistance movements if they seemed “to threaten US and UK government interests”.

Many people who fought on D-Day were undoubtedly motivated by a desire to defeat Fascism. It is difficult to see such motives in the politicians and generals who sent them to fight. In 1944, the Nazi regime was weakening, with successes for resistance movements and growing opposition to Hitler within Germany. Rather than supporting such resistance, Churchill, Roosevelt and Stalin insisted on sending more troops to kill and die, and on bombing thousands of civilians, to cement their own power in Europe.