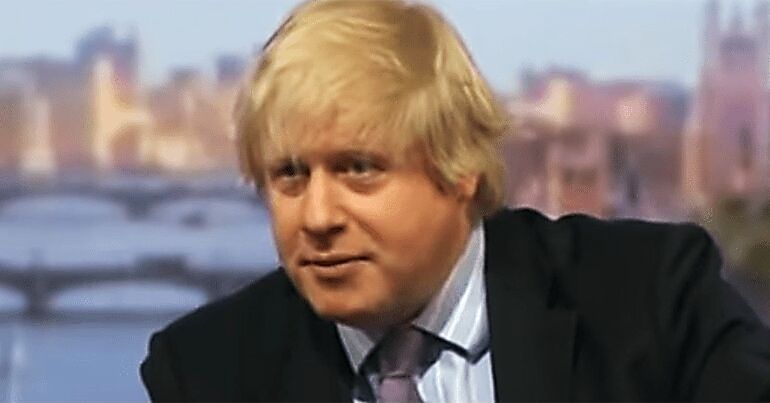 BBC presenter Eddie Mair branded Boris Johnson a “nasty piece of work” in 2013. Now Johnson is vying for the Conservative leadership, the interview has resurfaced and gone viral. It exposes Johnson fabricating quotes, lying to his party leader and conspiring to have a journalist’s ribs broken:

This interview tells you everything you need to know about Boris Johnson. As Eddie Mair succinctly concludes: "a nasty piece of work".pic.twitter.com/gKjPnrTJ42

In the video, Mair said:

The Times let you go after you made up a quote?

After claiming that Mair was using “big terms”, Johnson conceded that he “mildly sandpapered” something somebody said. Previously, Johnson had said that he felt a “deep, deep sense of shame and guilt” over fabricating a quote from his deceased godfather. Johnson’s quote claimed that King Edward II and his lover Piers Gaveston were getting together in Edward II’s 14th-century palace, despite the beheading of Gaveston a dozen years before the palace was built.

On the BBC, Mair moved onto what he called a “bare-faced lie”:

When you were in Michael Howard’s team you denied to him you were having an affair. It turned out you were. And he sacked you for that. Why did you lie to your party leader?

In response, Johnson said, “I don’t propose to go into all that again… why should I?” The former London mayor lied when Howard asked him if tabloid reports of his affair with Spectator columnist Petronella Wyatt were true.

“A nasty piece of work”

The programme includes your reaction as you listen to a phonecall in which your friend Darius Guppy asks you to supply the address of a journalist… so that he can have him physically assaulted. The words ‘beaten up’ and ‘broken ribs’ are said to you. And you, having heard that, you tell your friend… you will supply the address.

Aren’t you in fact making up quotes, lying to your party leader, wanting to be part of someone being physically assaulted? You’re a nasty piece of work, aren’t you?

Johnson’s transparent attempts to change the subject make The Thick of It look like real life. But this interview exposed a nasty streak in the former foreign secretary. With the Conservative leadership contest underway, we cannot allow the ruling class to simply install Johnson as prime minister. We need a general election immediately.