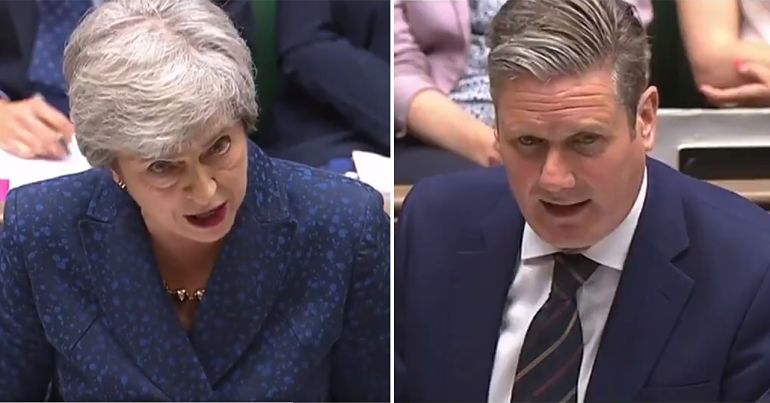 Jeremy Corbyn’s Labour joined forces with opposition parties in an attempt to block a “disastrous” no-deal Bexit. This move came the day before Boris Johnson launched his Conservative leadership bid officially. The front runner insists he’ll take the UK out of Europe with or without a deal. But on 12 June, parliament blocked the vote and the results may be devastating.

On 11 June, Labour tabled a cross-party motion to stop a no-deal Brexit. The motion aimed to give MPs full control of the commons agenda on 25 June. So this meant that opposition parties could introduce binding legislation and stop the next Conservative prime minister from forcing through a no-deal Brexit. Given this is a key promise from the front runners in the PM leadership race, it seemed a perfect move. But the motion lost by 309 votes to 298.

According to the BBC, the result “was greeted with cheers from the Tory benches”. Corbyn shouted “you won’t be cheering in September” in response. And he was spot on.

Johnson, Jeremy Hunt, Dominic Raab and Esther McVey have focussed their leadership bids on leaving the EU no matter what. Both Raab and McVey have indicated they might prorogue parliament  – close the commons – in order to force Brexit through, deal or no deal. And, as he launched his leadership bid, Johnson claimed he’s not pushing a no-deal Brexit but wants to prepare “vigorously and seriously” for this possibility.

Attorney-general Geoffrey Cox said suspending parliament to do this isn’t illegal. But the joint motion intended to block it happening. So the opposition move – also backed by Conservative MP Oliver Letwin and the Lib Dems’ Vince Cable – was crucial:

Labour has tabled a cross-party motion for tomorrow that would hand control of the parliamentary agenda on Tues 25 June to prevent a future Prime Minister proroguing Parliament to force through a no-deal Brexit against the will of Parliament. pic.twitter.com/oG4URZok9C

But all may not be lost, because some Conservative MPs backed the motion:

Dominic Grieve says that if today's motion doesn't pass, bringing down the government will be the only remaining means of stopping a no-deal Brexit

"And I will not hesitate to do that"

to reiterate her government’s assessment that a no-deal Brexit would be disastrous for Britain.

Jeremy Corbyn is right that a no-deal brexit would have very serious consequences for all regions of the UK – these are our brexit-supporting government's Own figures:#pmqs #boris #politicslive pic.twitter.com/sSGICz5Tmb

And Corbyn is absolutely correct because as the government’s own assessment stated, the economic impact “of a no deal scenario is likely to be severe”. Philip Alston – the UN special rapporteur on extreme poverty – also made it very clear that Brexit will affect the poorest people the most. He was highly critical of the current government, saying it was clear to him that “the impact of Brexit on people in poverty is an afterthought”.

“The disturbing, the ludicrous and the reckless”

As shadow Brexit secretary Keir Starmer said, the “Tory leadership contest” has now “descended into the disturbing, the ludicrous and the reckless” on Brexit. He continued:

None of the likely candidates for the top job has a credible plan for how to break the deadlock before the end of October.

According to Starmer, without a plan candidates have been “advocating a damaging no-deal Brexit”. As he also commented, some would ‘drag’ the Queen “into politics by asking her to shut down parliament”. So this cross-party vote is crucial because, as Starmer said:

MPs cannot be bystanders while the next Tory prime minister tries to crash the UK out of the European Union without a deal and without the consent of the British people.

This motion might have stopped a ludicrous Brexit race to the bottom. The only glimmer of hope is that defeating it could, as Dominic Grieve suggested, force a general election:

Well that’s interesting. If MPs can’t stop Boris Johnson taking us out of the EU without a deal a number of Tory MPs will have to keep to their word and bring down the government that attempts to do it.

Because in truth, none of the Tory leadership candidates offers any hope. What we need most is a general election and a change of government. And that can’t come soon enough.