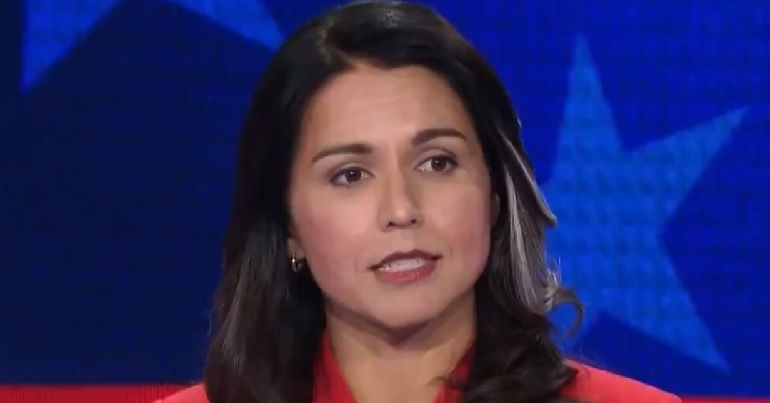 Iraq veteran Tulsi Gabbard wants to be the Democratic Party’s nominee for the 2020 presidential elections. But it’s her firm opposition to disastrous US foreign policies that has helped to propel her to the debate stage of the process. And in the first Democratic debate on 26 June, she really stood out.

One debate video captures perfectly why Gabbard’s message seems to be making waves. To begin with, she schools a Democratic colleague about the US-led invasion and occupation of Afghanistan. She then insists that:

For too long, our leaders have failed us – taking us from one regime-change war to the next, leading us into a new Cold War and arms race, costing us trillions of our hard-earned taxpayer dollars and countless lives. This insanity must end.

She promises instead to divert taxpayer money into “healthcare, a green economy, good-paying jobs, protecting our environment, and so much more”. And she stresses that the Trump administration’s current march to war with Iran would result in a conflict “far more devastating, far more costly than anything we ever saw in Iraq”. She then argues that all US citizens should “stand up and say no war with Iran”.

We have a government that is of, by, and for the rich and powerful. This must end.

The only one in the debate taking on the war machine

After the debate, a number of polls showed Gabbard at the top. Figures like Bernie Sanders participated in a second debate on 27 June.

Quartz called Gabbard “a surprise breakout”. The main reason was a spike in Google searches for her name, which saw her shoot ahead of all her opponents at a few key points: 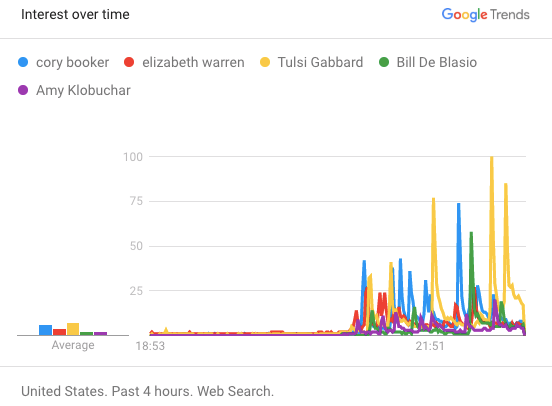 Map: before and after the #DemDebate pic.twitter.com/7y3iNoJR1N

One post-debate question, meanwhile, may sum up exactly why she made such a big impact. Because an MSNBC commentator asked:

And that’s an excellent question. Because it exposes the sad fact that firmly opposing disastrous US interventions abroad is still a minority position among Democratic Party politicians today. That’s precisely why Tulsi Gabbard made an impact and that’s exactly the kind of shake-up the official US opposition needs in order to defeat Donald Trump’s warmongers in 2020.