Rob Ford on Thursday’s YouGov poll putting Labour in 4th: “Parties can die if people stop believing in them”

Recent polls from different companies have seen Labour’s position vary from being in the lead to fourth position. Even if Labour were definitively ahead, the big dip both it and the Conservatives have faced is clearly not good for them. Despite this obvious uncertainty, many are confidently stating that Labour is trailing in the polls.

Here’s a snapshot of some recent polls from pollsters like Opinium, YouGov, Ipsos Mori, and Survation: 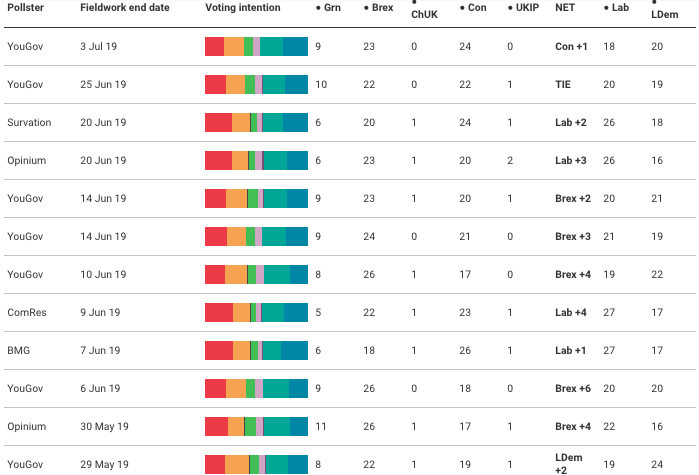 Britain Elects currently averages these out as follows:

Many people are discussing this YouGov poll:

The same people seem less interested in the Opinium poll from a few days later:

Politics professor Rob Ford advising people to “stop getting excited about tiny differences” is good advice. Few people seem to be following it. Political editor of Sky News Beth Rigby – tweeting after the Opinium poll came out – referred to the YouGov figure in a way which made it sound like an average rather than just one poll:

Former Labour MP Ian Austin got so excited by this one poll that he wrote an article condemning “racism and extremism” for the Daily Mail:

Labour's now in fourth place on just 18%.
Corbyn has the worst ratings of any leader of the opposition ever.
The party has been poisoned by racism and extremism.
When will decent MPs and members get rid of him?
Read my article for today's Daily Mail here:https://t.co/TF5FFGlxhX

Several people pointed out the issue with how polls were reported on the Andrew Marr Show:

It’s a real failure of @BBCPolitics that they pick & choose which stats & polls to challenge. This was just one, it is not attend. #Marr should know better to make such an omission, it’s all part of the media bias against Labour.

On today's #Marr programme, I counted at least 3 references to last week's YouGov poll that put Labour in 4th place. I counted 0 references to today's Opinium poll that has Labour in the lead, or any of the other five polls that currently have Labour ahead of the Tories.

Aaron Bastani predicted this the day before:

There are a few things we can say for certain right now:

There’s a lot of confusion. The big winners have been the Brexit Party and Liberal Democrats who’ve taken their vote from the historically larger parties. Some polling companies also have a better record than others. Polls taken before elections can be a poor indicator of how things turn out.

What we can’t say is that Labour is behind in the polls. So why are people who should know better doing exactly that?