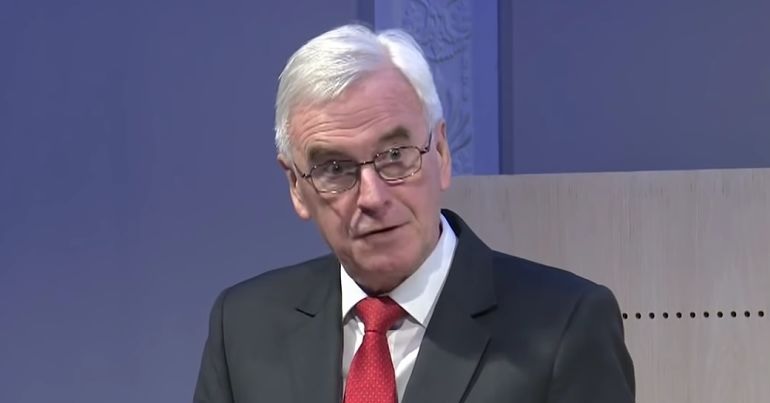 Shadow chancellor John McDonnell branded Boris Johnson’s government an “elective dictatorship” on 1 September after the administration took its assault on UK democracy to the next level.

The Tory attack on our democracy is getting worse. Gove has just refused to confirm to @AndrewMarr9 that the government will accept legislation passed by Parliament. This is a startling move beyond anything we’ve ever seen. Johnson government is becoming an elective dictatorship.

Johnson already plans to suspend parliament from “no earlier than Monday 9 September and no later than Thursday 12 September, until Monday 14 October”. But now senior cabinet minister Michael Gove has suggested that the government may ignore new parliamentary laws. Speaking to the BBC‘s Andrew Marr, Gove said:

Let’s see what the legislation says. You’re asking me about a pig in a poke. And I will wait to see what legislation the opposition may try to bring forward.

Opposition MPs are seeking to bring in laws that could mandate an extension to the Brexit process rather than no-deal on 31 October. When asked again, Gove doubled down:

We will see what the legislation says when it is brought forward. For me the point is that we already have legislation in place which an overwhelming majority of MPs voted for [article 50].

Gove is now in Johnson’s government, upholding the move to suspend parliament. Yet in June 2019 he said:

Proroguing parliament in order to try and get no deal through, I think would be wrong.

Chancellor Sajid Javid has made a similar rapid U-turn. On 16 June, he rejected the idea of suspending parliament, saying:

You don’t deliver on democracy by trashing democracy

The Conservative leader’s parliamentary shutdown of up to 35 days is the longest since 1945. This will have huge consequences. Although Johnson’s ministers cannot bring in brand new (primary) legislation, they can continue changing legislation that was previously delegated to them.

On social media, people were aghast:

Would the government abide by a new law from MPs to delay Brexit? asks #Marr

Michael Gove can’t give an answer. Parliament is sovereign, certainly more so than a government with no majority and a PM without a mandate. This is unprecedented.

This is really quite simple: any democracy where the government refuses to obey the rule of law is no longer a democracy. https://t.co/w5mzVPPxjf

Thursday: “People calling the prorogation of Parliament a coup are being hysterical and need to calm down.”

Sunday: “We might ignore the actual fucking law in our unending quest to catastrophically shit up your lives.” https://t.co/33r9LZo2Kn

It turns out the basic level of parliamentary democracy we thought we had achieved isn’t even set in stone. That’s all the more clear now Gove is suggesting the government will only follow the law if they feel like it. We have to fight hard for the rights that our ancestors died for. Before it’s too late.