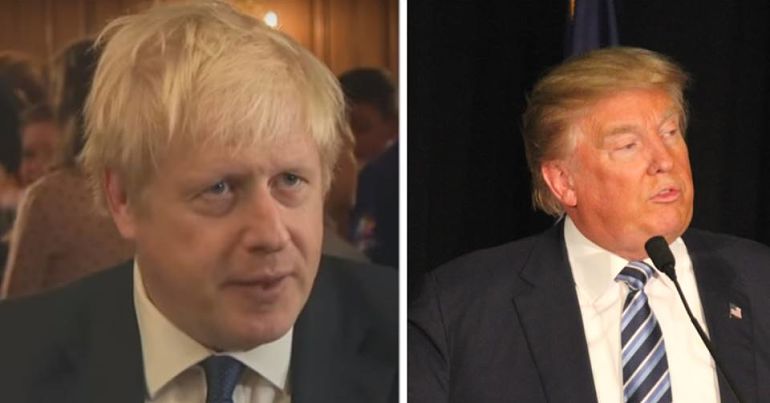 Academic Marc Owen Jones studied two of Boris Johnson’s Brexit tweets from 15 and 27 August. He found something, that could be revealing when he analysed 13,000 retweets of Johnson’s original messages.

Jones suggested that a large number of these retweets could either be “inorganic” or from Trump supporters.

His analysis also led Journalist Carole Cadwalladr to say some accounts sharing Johnson’s tweets may be either “fake” or “Trumpist”.

The referendum result must be respected.

We will leave the EU on 31st October. #LeaveOct31

He tweeted the exact same message on 27 August.

Jones is an assistant professor in Middle East studies and digital humanities at Hamad bin Khalifa University in Doha. One of his key research areas is investigating “propaganda and Twitter bots”.

When he investigated the descriptions of the accounts that retweeted Johnson’s original tweets, he discovered a large number contained the word “Trump” or “MAGA”. MAGA stands for Make America Great Again, which was Donald Trump’s 2016 presidential election slogan.

The account biographies mentioned the word “MAGA” 1,025 times and “Trump” 853 times. They only mentioned “#Brexit” 508 times. This is odd, according to Jones, as they were retweeting the comments of a British politician:

853 times. This outranks #Brexit, which was mentioned about 508 times. So remember, this is an analysis of a British politican's retweets. One may reasonably assume that if you analysed those people who retweeted it, their bios would probably be more likely to include Brexit

And while the accounts with “Trump” or MAGA” only accounted for 8% of the sample, it’s still significant according to Jones. It prompted him to look further.

While acknowledging the USA has a larger population than the UK, Jones feels one explanation for the many pro-Trump biographies is that:

If we make another assumption, that many of the accounts are inorganic trolls (i.e. paid to promote Trump and his policies), then it probably makes more sense.

This led Jones to suggest that based on his “ongoing analysis of Twitter propaganda”:

I would say organised entities are manipulating Twitter (including @BorisJohnson TL) in order to promote a hard-brexit. This #MAGA community’s other tropes are familiar and consistent –
they are anti-Corbyn, anti-Islam, often self described ‘patriots’, or veterans, pro-Israel and anti-fascists. I don’t doubt a huge number are real, but I am genuinely surprised by how many can consistently be so on message.

that of Johnson’s retweets, a large number of those promoting the message are accounts that clearly align themselves with Trump.

in terms of biographical detail. They are also remarkably on message (won't go into that now until maybe some NLP analysis can be conducted). Anyway, we can conclude that of Johnson's retweets, a large number of those promoting the message are accounts that clearly align

themselves with Trump. In a related analysis, I also conducted the same analysis on the #LeaveOct31. This returned around 14,000 individual accounts and 20,000 tweets. Again, MAGA and Trump are the most popular descriptions within the biographies of accounts tweeting

This is large scale analysis so I should re-emphasise a number of the accounts will be legitimate, but I’d wager a significant amount are absolutely not. We know enough now to assume that this type of behaviour is par for the course.

It is sad so little is being done about it. Anyway, be vigilant, and angry, and above all, #StopTheCoup.

Many people responded to Cadwalladr’s comments that people retweeting may be either ‘fake’ and ‘Trumpist’:

LOTS of bots pressuring for a No Deal Brexit to occur on October 31. They know this will obliterate UK's economy for the foreseeable future. People should be very skeptical of any account tweeting for UK's economic collapse.

Bannon / Trump / Farage / Johnson. So obvious it’s ridiculous. Question is who is behind it all, what are they wanting to get out of it and how far are they prepared to go.

I can well believe it, he is acting very Trumpian so faking his support is quite normal for him, he's a proven liar

While Jones’ findings are small in the greater scheme of things, it could be revealing of a far bigger picture. Also, his findings indicate that we need more people conducting this kind of analysis and investigation to counter far-right propaganda.

But even where this level of analysis is not possible, we need people to continuously question them and call them out.