As Swinson goes MIA, Corbyn proves he's Leader of the Opposition in both name and nature - Canary 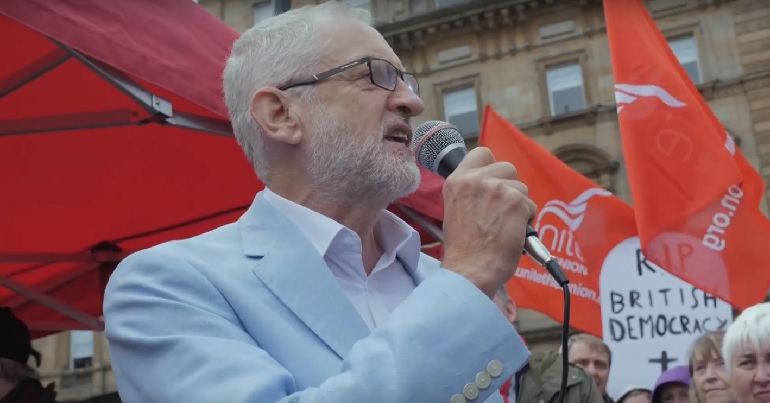 On 31 August, thousands of people took to the streets across Britain to oppose Boris Johnson’s parliamentary coup. And while Liberal Democrat attention-seeker Jo Swinson was missing in action, Labour leader Jeremy Corbyn stood proudly on the front line of the protests.

Swinson recently claimed that Corbyn had taken a holiday during the 2016 Brexit referendum. That was a lie. (Note: Corbyn was also a much more prominent campaigner in the referendum than any Lib Dem politician.) Yet now, despite things hotting up in parliament and the streets, Swinson herself was nowhere to be seen.

Swinson has long tried to portray her party as leading the fight against a potentially devastating no-deal Brexit. But she has been focusing much of her efforts on attacking Corbyn and lying about him in recent weeks. In particular, it seems she wants to torpedo Corbyn’s plan to lead a temporary government to stop a no-deal Brexit. This is despite around 70% of Lib Dems preferring his plan, and numerous Tory MPs pledging their support.

The Lib Dem press office denied to The Canary that Swinson is currently on holiday. But amid mass protests, people across the UK were asking where she was. And that doesn’t help to change the widespread perception that, far from leading the fight against a no-deal Brexit, Swinson sees opposing Corbyn as more of a priority.

Corbyn on the front line

Meanwhile, with Swinson all but silent and Johnson’s government continuing to threaten Britain’s fragile democracy, Corbyn stood up. Hitting the streets of Glasgow on 31 August, he spoke out against Johnson’s “smash and grab raid against our democracy”. He also insisted that:

[Johnson’s] agenda, and the no-deal Brexit, is an agenda of him running into the arms of Donald Trump… selling off our NHS to American corporations, and destroying the working rights, the consumer rights, and the environmental protections we’ve gained through membership of the EU – fought for by trade unions and environmental groups all over the continent.

And he had a simple message for Johnson, stressing:

it’s our parliament, no way do you take us out [of the EU] without a deal. We will stop you, and give the people their right and their say to determine their future.

We will stop Boris Johnson's smash and grab raid on democracy – and give people their say to determine our future.#DefendOurDemocracy pic.twitter.com/k2LPe6V62l

The media, as always, in their London bubble…

Johnson’s coup is not an issue just for London. It’s a problem that the whole of the UK needs to face head on. But some apparently expected Corbyn not to reflect that, and to stay in London instead:

Channel 4 News said Jeremy Corbyn did not attend the demos. Here is Jeremy Corbyn, today, at a demo in Glasgow. Only little auld Scotland. Not amazing London. True. But still a demo pic.twitter.com/Km2QVmSYac

. @Channel4News have said @jeremycorbyn didn’t attend today’s demonstrations. Here he is in Glasgow.

But we know the rules for the London media – the rest of the country doesn’t exist #SwitchItOff pic.twitter.com/CNDXzFtuxB

Protesters filled George Square in central Glasgow to hear speeches from public figures including Jeremy Corbyn and yet your reporter said he was nowhere to be seen. Doesn't Scotland count anymore then?

Jeremy Corbyn was speaking at the equivalent demo in Glasgow. People in London really do need to stop imagining they are the only ones doing politics. https://t.co/U4x7rx9MPN

To all the London based #FBPE types asking where Jeremy Corbyn is, the answer is Glasgow. It's a major city in Scotland for those of you unfamiliar with British geography outside the M25. Which, let's face it, is most of you.

In fact, the location of Corbyn’s speech was particularly apt. Because it’s Swinson’s home turf; she reportedly comes “from a suburb of Glasgow”, and her East Dunbartonshire constituency is “a leafy suburban area outwith the Glasgow municipal boundaries”. So Corbyn’s presence in Glasgow actually helped to highlight Swinson’s absence even more.

I see Jeremy Corbyn managed to make the 400 mile trip from Islington to Glasgow to attend the biggest Scottish #StopTheCoup demo whereas Jo Swinson couldn't even manage the 10 miles from East Dunbartonshire. Or indeed, to attend any demo at all.#NoDealLibDems

Opposition leader in both name and nature

Corbyn leads the biggest opposition party (by far) in parliament. Labour is also the UK’s biggest party, with over 500,000 members. That’s despite constant lies and smears from the political and media establishment.

But ‘leader of the opposition’ isn’t just a title. It’s a mindset. And by consistently standing alongside ordinary people up and down the country, his actions shout ‘leadership’ louder than any elitist poser ever could.