In 'stop the coup' demos, police arrest protesters while protecting some from the far right - The Canary 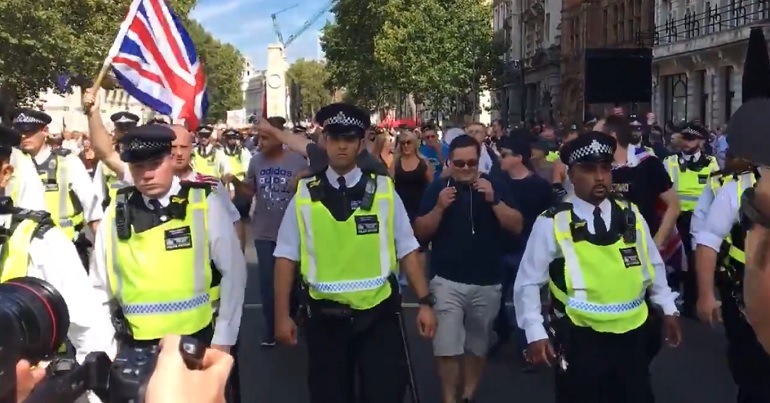 On 31 August, thousands of people took to the streets to protest against Boris Johnson’s proroguing of parliament. Protesters gathered in many major cities across the UK and shared updates and images on social media using the hashtag #stopthecoup.

However, the police presence was a cause for concern. Some tried to convince protesters in London to ‘clear the streets’:

The police have been sent in to persuade the protesters to clear the streets. But it’s cat & mouse.

“You shut down our Parliament, we shut down the streets” #stopthecoup pic.twitter.com/7xcp5JgxeY

The police also ‘kettled’ protesters by surrounding and confining them to a small area:

This might be my favourite photo of the night though.#StopTheCoup pic.twitter.com/GrFrlWL9hv

Many protesters in London have since been arrested. Among them is London Assembly Member and Councillor, Caroline Russell:

Apparently this is what it takes for the police to arrest citizens protesting to protect democracy. #StopTheCoup #DefendOurDemocracy https://t.co/8WX0wvYAZI

Support for those arrested

A protest to support arrestees took place at Charing Cross Station later in the evening on 31 August:

Chants of "no borders, no nations, no racist deportations" in front of Charing Cross police station where we're demonstrating in solidarity with #StopTheCoup arrestees ✊ pic.twitter.com/PGCf5bD5Fb

While the kettling and arrests are concerning in their own right, they are made worse by the fact that police actively protected counter-protesters. In other words, the police arrested people protesting against the government, while protecting those who support it:

Far right muppets stagger out of pub and when they are sure they have the protection of the police, share their racist dribblings. Brave boys! #StopTheCoup #BrexitBritain #Racists #thickcunts pic.twitter.com/f5Ds9BmZ7s

3000 pro-democracy Brummies on the street protesting. Barely a Bobby in sight #StopTheCoup #DefendDemocracy

Less than 30 pro-Brexit agitators on the street corner outside a pub, with almost as many police keeping watch

Pick a side 🇬🇧 pic.twitter.com/dA2oWQBmB3

Among the counter-protesters was convicted far-right leader James Goddard:

Turns out convicted fascist bedwetter [email protected] [email protected] has a police escort so he can wander around the Manchester #StopTheCoup protest with his phone, winding people up & begging online for money https://t.co/IkwutddZxY

Many people have expressed concerns over the arrests, highlighting the implications for democracy:

People are being arrested for protesting the suspension of parliament.

This isn’t meant to happen in democracies.

This is an elected member of the Assembly sitting down in the street defending our democracy against Johnson & Cummings coup.

We are at breaking point. We need an actual Democracy.#StopTheCoup https://t.co/akK3M8P81v

However, as some pointed out, the police working with the state to protect its interests is nothing new:

Greater Manchester Police has admitted that it has a written agreement to share information about disabled people and other activists who take part in protests with the DWP. And yet we're supposed to be scared of communism under #Labour#DefendOurDemocracy https://t.co/4xeVIgzZck

Not only has arresting people for protesting have a long history in our democracy. But the very same democracy has been progressively making it harder to assemble and protest. Today’s arrests are a feature of our democracy not a bug. https://t.co/rdm9zyx0xq

Despite this apparent criminalisation of dissent, the people have made their will abundantly clear through widespread protests. And if Boris Johnson’s government truly wishes to uphold democracy, it must now listen to the will of the people, and act accordingly.