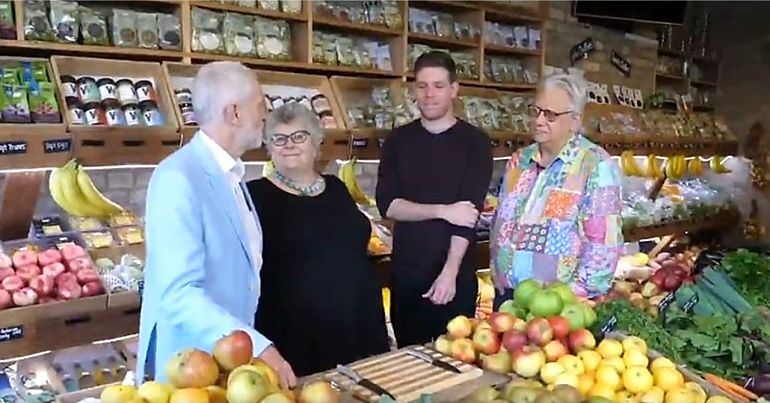 As the Jewish Chronicle makes clear in its reporting, it’s not a fan of Jeremy Corbyn. Most recently, it’s published an article decrying a video released by the Labour leader. It’s an absolute piece of work.

Corbyn released a video on 29 September:

For #RoshHashanah, I met Jewish Labour Party members who told me what it means for them this year as we shared apples and honey.

So as the High Holy Days start, I'd like to wish Jewish communities in Britain and across the world #Shanahtovah. pic.twitter.com/wWjhAd7fDN

In the video, Corbyn spoke with Jewish Labour Party members about Rosh Hashanah, the Jewish New Year. As member Sue Lukes explains, in the Jewish religion:

Traditionally during Rosh Hashanah, Jewish people eat apples with honey. One of Corbyn’s companions talked about apples being the “fruit of the earth” and the importance placed within Judaism on good stewardship of the earth. This led the group to talk about the climate crisis engulfing the planet, the efforts of young people to get the world to act on it and Labour’s plans to tackle it.

This, however, was way out of line according to the Jewish Chronicle and those it cites in the article. The outlet accused Corbyn of ‘sidelining’ the “festival’s central message of self-reflection and repentance” and using the visit to the grocers “as a way to promote Labour’s “Green Industrial Revolution” programme”.

But to suggest that the notions of self-reflection and repentance – examining who you are and amending for misdeeds – can not in any way relate to the climate crisis is nonsense. Indeed, the Board of Deputies of British Jews has itself addressed the link:

Before the @JewishChron publish attack pieces on @jeremycorbyn claiming #RoshHashanah has nothing to do with the environment, they should check that the @BoardofDeputies hasn't just said that it does. #facepalm https://t.co/7I26PgtaSL

Of course, no-one has to self-reflect on our species’ role in climate crisis, or repent for the things we’ve done that have brought us here. But if that’s what these Jewish people choose to do on Rosh Hashanah, why can’t they?

The Jewish Chronicle has an answer to that. Because, as its headline suggests, they’re the ‘wrong kind’ of Jewish people:

The Jewish Chronicle has something critical to point out about all of the people who accompanied Corbyn to the grocers. Most notably, it told readers that Rob Abrams was:

This triggered outrage of its own from people who know Abrams:

This is a disgraceful attack on an extraordinarily compassionate human being and close friend of mine. Rob is one of the most dedicated, hard working and deeply caring people. He organised Kaddish for Palestinian victims of Israel’s onslaught – not Hamas. https://t.co/6L6Z9Ek41g

In fact, the Jewish Chronicle‘s own previous article on the event in question includes the Kaddish group’s comments on their actions. A spokesperson said:

We have watched the violence unfolding in Gaza, particularly over the past few days, and felt anguished that the State of Israel, which claims to be a Jewish State, is inflicting such immense suffering on Palestinians.

As The Canary previously reported, a UN inquiry found that Israeli soldiers may be responsible for “war crimes” for their actions during the Great March of Return in 2018, where they:

killed and maimed Palestinian demonstrators who did not pose an imminent threat of death or serious injury to others when they were shot, nor were they directly participating in hostilities.

A piece of work

So there you have it. Corbyn talked with Jewish people about the importance of the climate crisis in relation to their religious beliefs and the Jewish Chronicle branded it ‘outrageous’ – and it launched a bogus attack on one of those people in the process. What an absolute piece of work the article is.