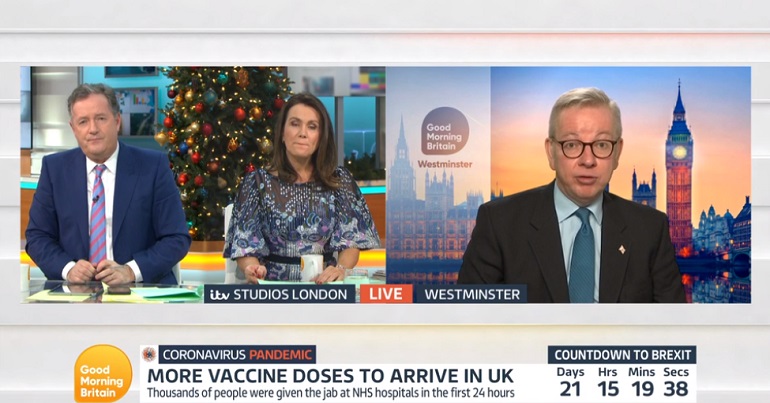 Cabinet Office minister Michael Gove was on Good Morning Britain (GMB) on Wednesday 9 December. During a grilling by Piers Morgan, he made a statement that could come back to haunt him. It was about the Tories’ policy at the start of the coronavirus (Covid-19) pandemic. And Morgan exposed Gove for trying to rewrite his government’s handling of the crisis.

Morgan claimed that around 16 March, Vallance said on BBC Radio 4 that the government was “following [a policy of] herd immunity”. Gove denied this was the case. He said:

We were not following a policy of herd immunity.

Sadly for Gove, Vallance did say that. On 13 March, he was on the Radio 4 Today programme. Vallance said herd immunity was the government’s aim:

because most people, the vast majority of people, get a mild illness, to build up some degree of herd immunity as well

But Vallance also said the same on Sky News, on the same day. The host said:

herd immunity, I know you talked about [it] yesterday when you were appearing with the prime minister, in terms of building up a herd immunity within the UK… what sort of percentage of people need to have contracted the virus?

Probably about 60% or so. And we think that this virus is likely to be one that comes back year-on-year, becomes like a seasonal virus, and communities will become immune to it, and that’s going to be an important part of controlling this, longer term.

This wasn’t some off-the-cuff comment. Because Vallance also said the same thing on the same day on ITV News. It noted that he:

said the advice the Government is following is not looking to suppress the disease entirely but to help create a “herd immunity in the UK” while protecting the most vulnerable from Covid-19, warning “this is not a short term outbreak, this is going to go on for months.”

Two days later, and as Vox reported, the government was already backtracking on Vallance’s comments. This was after what Vox called an “outpouring of criticism” over the herd immunity approach.  PoliticsHome reported that:

writing in the Sunday Telegraph, the Health Secretary said the Government’s plan was “based on the expertise of world-leading scientists”.

Mr Hancock added: “Herd immunity is not a part of it. That is a scientific concept, not a goal or a strategy. Our goal is to protect life from this virus, our strategy is to protect the most vulnerable and protect the NHS through contain, delay, research and mitigate.”

So, what can we draw from this?

As Morgan said to Gove on GMB on 9 December:

In short, it’s becoming increasingly likely that the Tories’ initial approach was going to be one of herd immunity. But when they realised the catastrophic political fall-out from the potential deaths this would involve, they backtracked. This meant that by the time the government did act, it was too little, too late. When the public inquiry into the government’s handling of the pandemic comes, there will be serious questions over this early period in March.