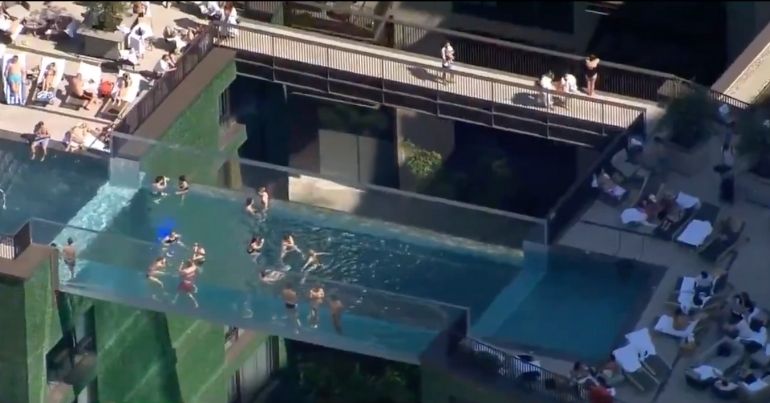 On 1 June, the BBC shared a video of swimmers enjoying London’s new ‘Sky Pool’, which is “believed to be the world’s first transparent pool built between two skyscrapers”. People soon took to Twitter to highlight the entrenched inequalities that the opulent architectural feature represents. Indeed, it’s situated at the heart of a city in which an estimated 170,068 people are homeless and over 600,000 children live in poverty.

The Sky Pool is situated in Embassy Gardens, a housing development near the new US Embassy. The development is part of the £3bn Nine Elms regeneration zone, a riverside development which covers large areas of land from Vauxhall to Battersea in the south-west London boroughs of Lambeth and Wandsworth. Highlighting the inequality that persists in what has been dubbed an “opportunity area”, Labour councillor Maurice McIeod tweeted:

This is in my ward…in which more than half of children officially live in poverty. Just saying. https://t.co/RQGVwBu9mt

Sharing the realities of life in the area for most residents, Jason Okundaye said:

This is 5 minutes away from the estate I grew up on in Battersea where the council abandons social housing tenants with damp, silverfish and no central heating in their flats for months but rubber stamps luxury developments like this on our doorstep https://t.co/ZyYCtRWAZR

Deploring the Tories’ prioritisation of private developments over social housing in the face of an entrenched housing crisis, Labour councillor Aydin Dikerdem said:

That’s why what’s happened here is so upsetting. We’re never again going to have all this abandoned industrial space which could’ve transformed the lives of people in a borough where thousands are statutorily homeless or spending half their income on private rent.

In February, journalist Oliver Wainright highlighted the fact that shared-ownership residents living in Embassy Gardens aren’t allowed access to the Sky Pool, the front door, or other features in the building. They must use “poor doors”, while private owners make the most of the amenities:

A reminder that the affordable housing residents of this development, whose windows look straight on to the pool, are not allowed to access it https://t.co/qgjWCJ8byB

In a thread setting out the inequalities inherent in the housing market, Nick Perry said:

I see responses to the silly “sky pool” has triggered developers’ apologists and their defence of so-called “poor doors”.

“The expensive flats cost more and that extra pays for the affordable housing.” Except it often doesn’t. Yet unfailingly inflates the housing market.

Others, meanwhile, questioned the BBC‘s tone:

Upbeat @BBCNews puff piece about the ‘sky pool’ that fails to mention how residents with shared ownership are locked out of access. The Beeb cannot comprehend this as ‘political’ editorialising but it’s precisely that: whitewashed inequality presented as a neutral, fun story. https://t.co/w5h46bvnbc

14 June will mark the 4th anniversary of the Grenfell Tower tragedy, which killed 72 residents. On 7 May, petrified residents called firefighters to New Providence Wharf, a tower block covered in “Grenfell-style” cladding. Although the cladding was not found to be a “significant factor” in this case, the London Fire Brigade found numerous failings in the building that should have been addressed by the building’s owner.

According to Anoosh Chakelian, the Sky Pool’s developer Ballymore is also responsible for New Providence Wharf, but made residents wait nearly four years to have the flammable cladding removed. Olympic Park Homes Action reflected on this injustice:

That the same developer can invest in a pool deemed architecturally fanciful on one side of London & fail for nearly 4 years to remove flammable cladding from a building on the other is a bleak story of our warped housing system. #BuildingSafetyCrisis https://t.co/I3FvzFcyR4

So to confirm: Ballymore built an all-glass swimming pool suspended 115 foot in the sky, but said the reason it took four years to even begin removing Grenfell-style cladding from New Providence Wharf is because the work is "extremely complicated". https://t.co/vRBxt9tltD

Sky pools for the rich, flammable cladding for the poor https://t.co/W5rpgCHt7j