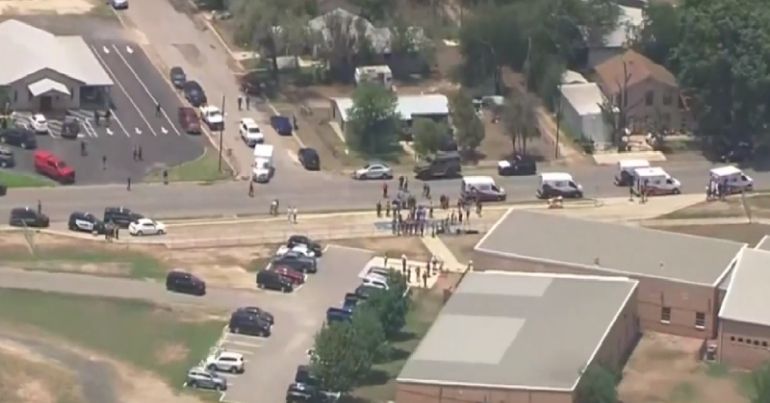 More grim allegations about the conduct of police at the Uvalde school shooting are emerging. The massacre took place in Texas on Wednesday. 21 students and teachers died when 18 year old Salvador Ramos entered the school armed with several assault weapons. Ramos was eventually shot and killed.

Images of heavily armed cops holding back terrified parents while apparently refusing to engage the shooter themselves have circulated widely. Now one parent has said that police handcuffed her and tasered and pepper sprayed other parents at the scene:

Parents in Uvalde saying they were

while telling police to go into the school to save their kids or while trying to pick up their kids after the shooting. https://t.co/bkLA0SymNR

Other horrific stories are also trickling in via social media as people have tried to assess what actually happened during the attacks:

Let's review the (reported) performance of the Uvalde Police and CBP response team on Tuesday:

– Tazed / arrested parents begging them to go in, and attempting to rescue their kids themselves

Footage showed children who had been hiding in school buses climbing out of the vehicle windows:

And more anger was aimed at police who are being accused of spending more time hassling parents than dealing with the attacker:

The police were so awful. Instead of preventing parents for an hour they could have saved many lives, wtf. #Uvalde

People continue to be shocked at the police’s alleged inaction during the assault, despite the fact they were armed to the teeth with military-grade weapons:

the cops who responded to the uvalde school shooting had bodyarmor, guns, numbers, and training

despite that, they all made the choice to stand around around harassing parents while those kids and their teachers faced a murderer

there's no excuse for it pic.twitter.com/g4uQ8S5XIT

Many have been pointing out that the police enjoy substantial funding, but seem to be incapable of actually doing their jobs:

Uvalde is a haunting example of why police departments don’t need more funding. Money cant fix incompetence or corruption. Despite the training, money, resources, and man power, they only managed to subdue desperate parents and journalists instead of saving those kids’ lives…

Cops saved their own kids

And people have said that some cops actually made sure to get their own kids out of the school:

Here’s a Texas DPS Lieutenant telling a local station that some officers breached the school to get their own children BEFORE the shooter was taken down. pic.twitter.com/BrvS4sCqp6

It has been reported that the FBI may now investigate the incident and the police response. A move some US politicians, like Texas congressman Joaquin Castro, have called for:

State authorities have provided the public with conflicting accounts of how the tragedy in Uvalde unfolded. I’m calling on the @FBI to use their maximum authority to investigate and provide a full report on the timeline, the law enforcement response and how 21 Texans were killed.

Some social media users tried to contemplate the horror of parents trying to reach their kids while police did nothing:

Imagine being a parent in Uvalde, dying a thousand deaths while your baby is being slaughtered inside the school.
And you can't get the police to do anything.

And it was suggested that police inaction compared with parents determination to save their children was the ultimate commentary on the realities of life in the US today:

The reason those parents wanted to rush inside to save their kids is because they don't trust law enforcement to keep them safe, or to save them.

That says more about our country than anything else.#Uvalde

The next weeks and months will tell us more about what happened in the small Texas town of Uvalde. And the debates on gun control and policing are not going to likely to quieten down for a very long time.