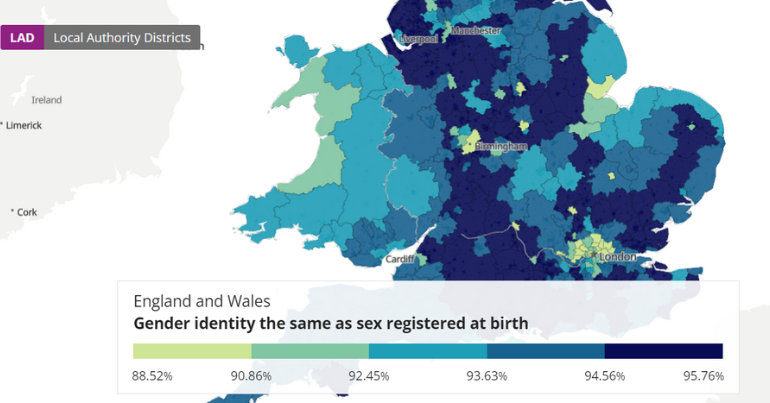 More than a quarter million people in England and Wales identify with a gender different from their sex registered at birth, the countries’ first such census data showed on Friday 6 November.

The once-a-decade questionnaire, conducted in 2022, also revealed around 1.5 million people gave their sexual orientation as lesbian, gay, bisexual, or another queer sexuality. This represents 3.2% of individuals aged 16 and over.

It was the first time English and Welsh census data included an estimate of the LGBTQ+ population, as well as asking about gender identity.

Campaign group Stonewall described the publication of the figures as a “historic step forward”. It comes after decades of campaigning and centuries of LGBTQ+ people being “invisible” and “missing from the national record”. Nancy Kelley, the charity’s chief executive, added that it was:

finally painting an accurate picture of the diverse ‘Rainbow Britain’ that we now live in, where more and more of us are proud to be who we are.

On Twitter, she also commented on the robust nature of the data due to the sheer number of responses:

I am in absolutely HOG HEAVEN with the Census data release🤓🏳️‍⚧️🏳️‍🌈. First – the response rates on both the sexual orientation and gender identity questions are over 90%. This is *brilliant* news in terms of the data being robust and useful 🧵 pic.twitter.com/LnuyGiXTv6

The Office for National Statistics (ONS) will be publishing the 2021 census in stages over two years.

It has already revealed that 262,000 people said their gender identity was different from their sex registered at birth. This represents 0.5% of the population aged 16 and over. This means that, for every 200 people in the UK, one of them will be trans. People on Twitter were therefore quick to highlight the fact that the current moral panic around trans people is completely out of proportion:

But only 0.5% of people did, which is about how much of the population we expect are trans

Almost like all the fuss is made up nonsense

The ONS Census data indicates trans people make up about 0.5% of the British Population.

Transphobes, in and outside if this Government, have created a sensational and vast moral panic all to go after approximately 262,000 of us who are just trying to live a genuine life.

Among those responding to questions about sexual orientation, 43.4 million people – 89.4% of the population aged 16 and over – identified as heterosexual. Some 748,000 described themselves as gay or lesbian, 624,000 as bisexual, and 165,000 selected “other sexual orientation”. Important data was also gathered on some less-often-mentioned sexual identities:

New census data on sexual orientation shows 1.28% of residents of England and Wales are bisexual.

The fact that the data could be searched by area led to a wide spread of observations. Some were pure fun:

We all KNEW IT but now we have concrete census PROOF:

Gays simply won't consider living in West London because it's TOO MUCH OF A FAFF to get to. pic.twitter.com/T38ZhQB0vb

You could even figure out the gayest place to live with the cheapest housing (it’s Lincoln, by the way):

Literally everyone is asking for it, so here it is: the gay housing index

However, the data also pointed to some worrying correlations, such as trans people being confined to poorer areas:

I was interested in seeing if there was a correlation between deprived neighbourhoods and neighbourhoods where trans people lived from the census data. Looks like there is (r=0.47 if I remember my stats correctly). Here's a scatter graph. pic.twitter.com/V31UM0uMgK

The ONS noted that nearly 46 million people – 94% of the population aged 16 and over – answered the question on gender identity, and around 45 million people did so about their sexual orientation.

understand the extent and nature of disadvantage which people may be experiencing in terms of educational outcomes, health, employment and housing.

However, some trans people were more cautious, given the current reactionary political climate. One Twitter user brilliantly summed up the potential issue:

Scenario 1: the numbers suggest there are fewer of us than estimated. In this instance we may see The Usual Suspects claiming that, since there are so few of us (particularly trans people), that we don’t need as many protections, services, support, etc.

Scenario 2: the numbers suggest there are more of us than expected. If this is the case, we will likely see a bigger pushback against LGBTQ+ people, particularly trans people. There may be calls to limit how we can identify ourselves, and concerns about the stability of gender.

How exactly the increasingly transphobic British government will react to the census results remains to be seen. Somehow, though, it is a struggle to imagine an immediate future in which this new data leads to a lessening of hostilities against the UK’s queer population.