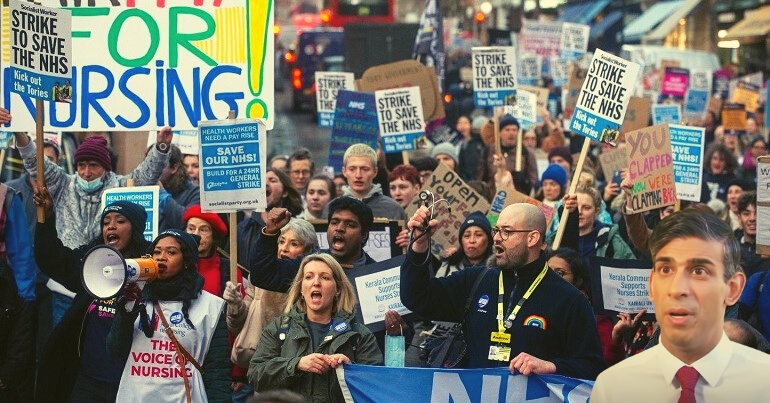 After the National Union of Rail, Maritime and Transport Workers (RMT) announced a protest opposite Downing Street, a group of NHS workers has also organised one. It’ll be just two days after the RMT’s strike, with both unions taking the fight directly to Rishi Sunak’s front door.

As the Canary previously reported, the RMT will be protesting opposite Downing Street on Monday 16 January at 6pm. It’s over the Tories’ anti-strike laws. We previously wrote that:

the Strikes (Minimum Service Levels) Bill… will force trade unions in certain industries to make sure some people work during strikes – defeating the object of industrial action entirely. The Tories call this “minimum services levels”. They’re mainly focusing on the emergency and transport services to begin with.

So, the RMT is not having it – rallying people to go to Downing Street, where the heart of the problem lies. The union said:

we will simply not accept this attack on our fundamental and democratic rights to strike.

Now, NHS workers will also be paying Sunak a visit – this time, as an extension of their strikes.

Royal College of Nurses (RCN) members will be striking on Wednesday 18 and Thursday 19 January – staging walk outs across England. Then, Unison ambulance staff will strike on Monday 23 January. To coincide with the RCN 18 January walk-out, grassroots campaign groups NHS Workers Say No, Keep Our NHS Public, and NHS Staff Voices have organised a solidarity rally on 18 January:

🪧 Join NHS Staff, activists and campaigners on 18 Jan as we march in Solidarity with all NHS Staff taking strike action!

With shocking news of 500 people dying avoidable deaths per week due to delays in emergency care, alongside heightened awareness of the government’s heinous plans to destroy the NHS – something it has been doing for years – we are seeing more NHS workers coming out in support of strikes.

We are tired of working to the bone in order to keep patients safe and healthy, while the government refuse to do the same for us!

Staff are striking as we face yet another year of cuts to our pay – this has left us with the highest waiting lists on record and a national staffing crisis. We have been raising the alarm for years, but our callous government refuse to listen.

We must come out in opposition and make it clear WE DO NOT support plans to further privatise the NHS in order to keep the wealthy rich and satisfied, while regular people like us pay with our taxes and our lives.

We must come out and show them we will no longer allow this to continue.

Meanwhile, NHS Workers Say No has joined as a signatory on an open letter from campaign group EveryDoctor:

🙌 We're delighted to welcome NHS Workers Say No as signatories on our letter calling on UK leaders to declare a #HumanitarianCrisis in the NHS and take action accordingly to save lives.

In January 2017, the Chief Executive of the British Red Cross described the situation in the NHS during winter pressures as a humanitarian crisis. We are now witnessing a wholesale collapse of our NHS and social care system, with millions of people on waiting lists and hundreds of people dying needlessly every single week.

Given this loss of human life, the leaders of all nations must declare this a humanitarian crisis. With every day they fail to act, more people are needlessly dying.

It’s remarkably positive that NHS workers are going beyond just striking. Doing protests and publishing pointed letters will draw attention to years of Tory underfunding and wilful decimation of the NHS. This multi-pronged approach is what’s needed at this time. So, see you all outside Downing Street on 18 January – if we don’t see you before at the RMT demo on the 16th.

Featured image via NHS Workers Say No and the Telegraph – YouTube