The killer in the rubble - Canary 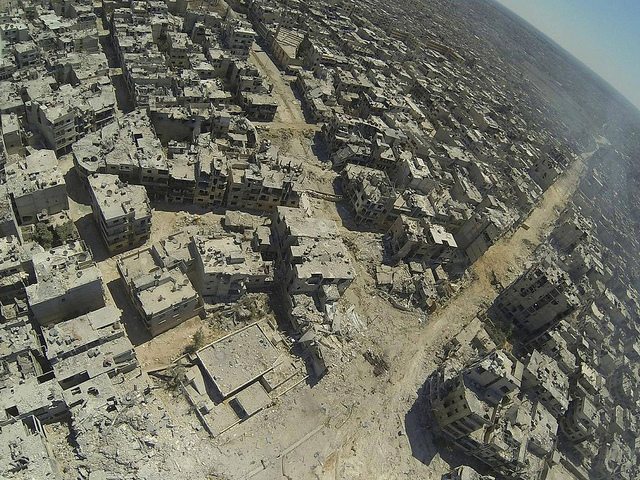 Cities are being decimated. In Homs, Aleppo, Gaza and many other places across the conflict zones of the Middle East, homes, hospitals, streets, schools and industrial sites are now sprawling piles of rubble. Researchers from the Chinese university of Wuhan were shocked to discover that the amount of light emitted over Syria at night has dropped by 83% since 2011.

The impossibility of maintaining the fabric of commercial, social, and family lives under such conditions is painfully obvious. And while images of buildings ripped open are all that we need to see to understand why people are leaving their homes, less obvious is the destruction of human habitat. Cities reduced to rubble create an actively toxic environment.

When shells are thudding into civilian neighbourhoods, asbestos, (particularly bad in Lebanon) is probably low on the list of immediate concerns. However, in terms of long-term sickness and loss of life, the dangers posed by chemical pollution, and even dust, are the comet’s tail of these urban wars. One only has to look at the aftermath of 9/11: cleanup workers are dying before their compensation claims are even resolved. The Twin Towers were vast, but not city-sized. In the aftermath, those exposed to the toxic dust and rubble were still in their own homes and had access to excellent health care. Not so for the refugees.

Many who have left their homes would like to return one day, and many do so, whether or not it is safe to live or grow food there. While long-term plans for reconstructions of conflict zones, such as Iraq, never come cheap, the need to environmental clean-up is clear. The longer rubble sits, the more dangerous it becomes – to say nothing of the pollution of water sources, directly through chemical contamination, and indirectly via the destruction of infrastructure.

In addition, the contents of the ballistics themselves are highly toxic. TNT, found in barrel bombs, is broken down by light, and will interact with calcium in rubble and soil. It is genotoxic and causes a host of problems affecting most body systems, including the liver, kidneys and blood. Production of TNT is also highly polluting, so Syria is affected by every stage of the bomb’s life cycle. Asbestos, silica, synthetic fibres, silicon, magnesium, aluminium, chromium, and the heavy metals selenium and thallium are all present in building rubble, and each has its own constellation of health risks as well as unknown toxicity when they interact with other pollutants.

Who will pay to clean it all up is a massive question. The answer is probably the same as always: people on the ground, far removed from the causes and profits, who will pay with their lives.